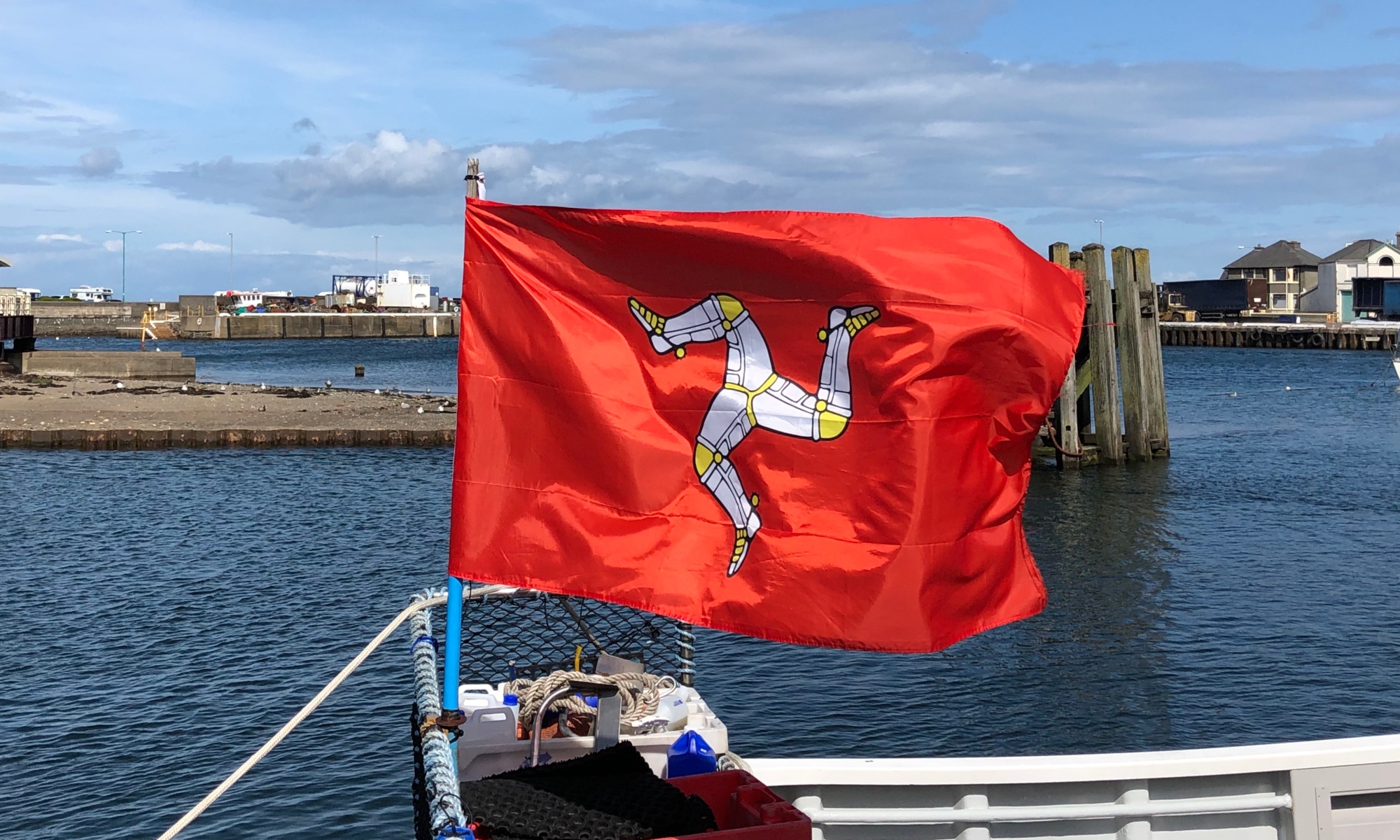 Least I forget or repeat, the best way to get around London by tube, bus or the Thames Clipper is using an Oyster Card. And your Oyster card can also be used for the fast train to Heathrow. It leaves from Paddington Station where we were whisked to Heathrow in under 30 minutes. A cab would take way over an hour and cost a whole lot more!

We arrived in plenty of time to catch our FLYBE Airlines flight to the Isle of Man. I must admit I had to persuade Joyce that Flybe was a ‘real airline’ and she wouldn’t need to flap her arms outside the windows to keep us in the air. But it was an prop and it’s usual to see propellers nowadays.

A quick 45-minute flight and we landed in the middle of the Irish Sea on the Isle of Man. The Isle is a self-governing British Crown dependency in the sea between Great Britain and Ireland.

This island, which has been populated since 6500 BC, has many Gaelic influences, including the Manx language. It has been conquered by Norsemen, Scotland, and England, yet never became a part of the Kingdom of Great Britain, always retaining it’s internal self-government.

In 1881 ,the Isle of Man parliament, The Tynwald, became the first legislative national parliament in the entire world to give women the right to vote (although it excluded married women!). The island has its own currency, also known as the Manx, as well as a large offshore banking business where wealthy Brits can invest their money without the horrendous taxes charged in the UK.

This was my 2nd visit to this lovely island. We were planning to house and pet sit for my good friend Mary while she went off to visit her daughter but at the last minute her doctor would not allow her to fly due to the residue of a bad case of shingles. We thought we would not impose on her and instead get a hotel room for our 10-day stay. Boy, was that a mistake! Or at least the hotel was a mistake.

The Trevelyan Hotel was worse than the hotel in the movie, The Shining! We were certain we would open the door to our room and at any moment see the twin girls standing down the dark, dank hallway.

Above you will see our spacious, ‘upgraded’, twin-bedded room which was only wide enough for 1 person to pass. The center photo is of Joyce standing in the ‘brightly lit’ hallway which you can see has a slight ‘rise’ to the floor. And lastly is a our overly-large closet, mirror and dresser combo. There was also a chair in there for our seating comfort but we chose to move it out into our large room. Be thankful I didn’t take a photo of the bathroom!

There was no front desk. If you needed something you had to phone the management who only rarely answered. There was no bar or lounge or TV as advertised. The owner, when checking in told us not to expect the promised wifi in our room – but we might try hooking onto the wifi of the hotel next door by holding our phone near the window. I could go on and on with all the issues we ran into in the 3 nights we stayed here, including both of us getting terribly sick to our stomachs, but I’ll just say that on the 4th day we took Mary up on her invitation to move in with her and we thoroughly enjoyed the rest of our stay on the Isle of Man. (PS: I filed complaints with the IoM Tourism Bureau, Hotels.com, my credit card company, and the hotel – all to no avail. We had to pay for the entire 10-days!!!!)

But onto more pleasant things. Mary was fighting a cold as well as healing from her bout of shingles so she gave us her car and off we went to explore the island. There were so many places I wanted to show Joyce, so for the next 5 days we were out the door early each morning and returned late in the evening.

Our first stop was the Fairy Bridge. Wee folk have lived under this small bridge for centuries and if you do not stop, ’tilt your hat hello’ and leave a small token or note tucked into the rocks when you arrive on the Isle, bad luck will be sure to follow.

Once we paid our respects to the fairies, it was off to see castles and big-horned sheep, numerous fishing-boat filled harbours, blooming hydrangeas of every color, beautiful old homes, the tailless island cat (a Manx – what else?), a Broadway-worthy production of ‘Singing in the Rain’ at the magnificently restored Gaiety Theater, and folks just enjoying a sunny day.

We were thrilled to spend a evening with our good friends from San Miguel de Allende, MX, Carol and Art, who were on the island for the world-famous TT motorcycle races but not so thrilled with a performance by a truly awful Elvis-impersonator!

We had a lovely and laugh-filled time with Mary and her furry kids. I’m looking forward to returning the first of February to house and pet sit for her while she takes a much-needed cruise to the Caribbean. But now it was time to once more board a plane, this time Aer Lingus, for a short flight to Dublin. Unfortunately we are both taking Mary’s cold with us.