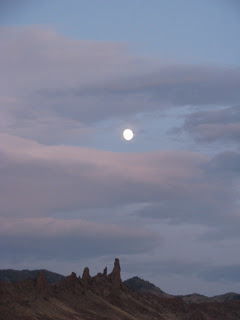 My time in Cody came to an end on Sunday when the owner of YVI let 3 of his workcampers go – now! I refused to leave until I had my last paycheck in hand – which he wanted to mail to us – not! Won that little battle and after 3 months un-plugged, hooked up the Jeep and off I went to spend my first night in a WalMart parking lot. Everything in Cody was booked, so thought I would see what ‘boondocking’ (no hookups) was all about. By the time I turned off my light at 10 p.m. there were over 30 rigs in the parking lot with me of every size and make. It was a hoot!

The next morning, Monday, I had Winnie’s oil and filter changed and tires checked, then headed to Lander, WY – southwest about 4 hours. I spent the night at the really sweet Pioneer RV Park and had a great time chatting with their work/campers. Learned that I wasn’t the first, and sure won’t be the last, to get in a situation with a bad boss.

I spent most of Tuesday sightseeing. This is the home of the Arapahoe and Shoshone reservations and where Sacajawea lived out her later years, after leading the Lewis & Clark expedition, and is buried. I went into Sinks Canyon where the mountain snow run-off literally flows down into a huge sink-hole, only to emerge a 1/2 miles down the canyon in a deep pool where these enormous trout live – and get fed by the tourists.

Tuesday evening was spent laying out my route. Since I now had ‘free time’ I decided to ‘go West’. I have always wanted to see the awe-inspiring and totally photogenic national parks of Utah – Arches, Monument Valley (where all the John Ford/John Wayne movies were shot), Mesa Verde, Lake Powell, the north rim of the Grand Canyon, Bryce and Zion. You can make a Grand Circle of this area – and that’s what I decided to do.

Today I drove through my first ‘big’ mountain pass going south out of Lander down to I-80 and into Utah. Tonight I’m in Provo, just a few miles from Salt Lake City and right by the BYU campus in a nice, lakeside park with lots of trees and lots of RV’s. Tomorrow I’ll drive to Moab and make that my ‘home’ for 4-5 days while seeing everything there is to see on the East side of the Circle.

The plan is to move south and then back up north and when I finish with Utah, head to Lake Tahoe to visit with friends Suzanne and John, who I met in Illinois when I first started this odyssey. They’ve agreed to let me park Winnie for the weekend at John’s studio and I’ll hop in the Jeep and drive over to Sacramento to visit with #1 son Tobin and his lady, Courtney, and see their new home. I’ll then turn around and head back to meet my good friend Ellen for our tour of Taos and Santa Fe – before heading to Florida! Does this seem like a lot of traveling? Yep – and maybe I won’t get to do it all, but it will be fun trying! Will keep you posted and hopefully lots of great photos to share.

Until next time….take care of each other.