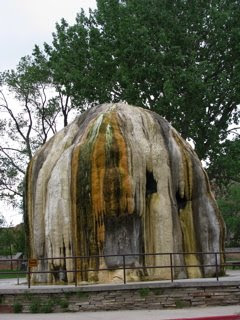 It was time to get away! I packed up yesterday and met my friend Donn 83 miles south of Cody in the very quaint and unusual town of Thermopolis.

From it’s name, you can deduce that it’s where thermal springs continuously bubble up all through the area at a temperature of around 135 degrees.

Sulfur does not smell nice – it smells just like rotten eggs! – and this smell permeates most of the town. But we had fun exploring the state park, which is home for lots of buffalo, several ‘plunge parks’ where you can rent towels and even bathing suits and either sit in or fly down shuts into the very warm, stinky waters. The picture is of the TeePee Fountain which was started in 1903 has continuously poured out it’s mineral waters while the minerals have solidified around it.

Donn and I enjoyed a delightful dinner at the town’s very quirky restaurant, The Prospector Pizzeria & Italian Eatery. We were also thrilled to learn the town was hosting the 2009 State Fiddler’s Championship. Not only is this a competition, but each evening the fiddlers, guitar, mandolin and banjo players gather in the lobby’s of the hotels and ‘jam’ just for the fun of it! We stumbled across one such ‘jam’ at the Best Western and were treated to a wonderful, musical free-for-all- concert for way over an hour.

Jut south of Thermopolis, when driving up to Cody, one must drive through the Wind River Canyon. It’s Arapahoe land and it’s just beautiful. Because I was driving Winnine and towing Willy, I didn’t take time to pull off and take pictures. But this morning I took the time (several hours, in fact) to drive south and then back north through the canyon, stopping and taking as many pictures as I wanted! The land here has ‘greened’ since I arrived, and the rather dull browns and reds have given away to every shade of green – from the gray-green of the tumble weed to the green grasses to the dark greens of the pines which cover the mountains. The river are flowing fast and furious with all the snow-run-offs. The white-river rafting companies are back in business and the fishermen are waiting for the the waters to settle down.

I was pleasantly surprised to find 3 Indian teepee’s set-up along side the river, in the shadow of the mountains. I think they must be ‘real’ and used in tribal ceremonies during the summer months. And the wildflowers were blooming all along the roadside – bright blue-bells giving color to the vast grasslands which flank each side of the road-way.

Even though I was off-property less than 24-hours, it was a treat to be able to spend time with a new friend, listen to music improvised and played by first-rate musicians, see new scenery and marvel at the beauty of the country we live in.

Until next time…. take care of each other.

One Reply to “Thermopolis, WY”