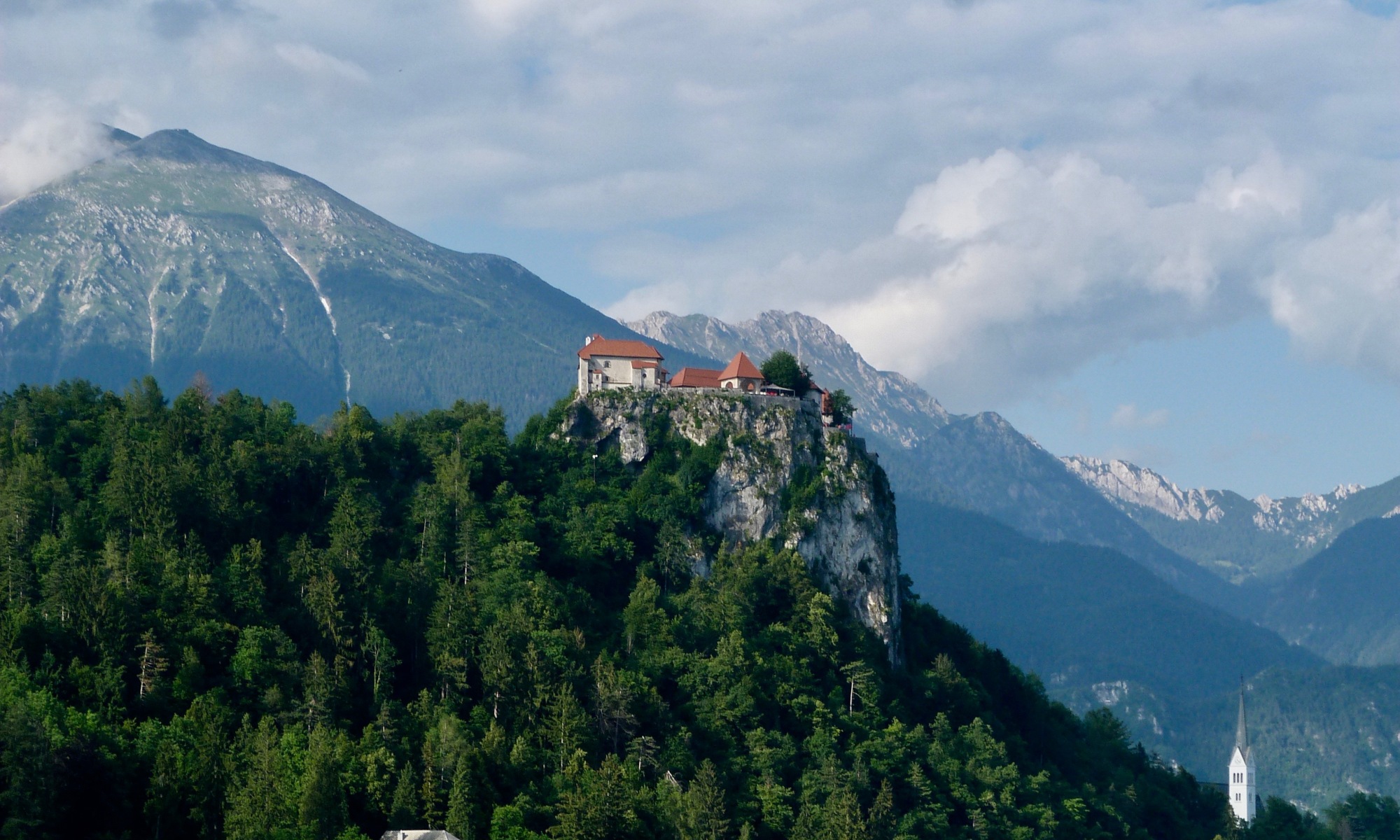 Once upon a time in a land far, far away there lived a beautiful princess in a castle perched on a mountain top overlooking a crystal-clear, turquoise blue lake.

The Princess, against her father’s wishes, fell in love with a handsome boy from the village down below. They would sneak away and laugh and swim and do what it is all young lovers do. But one day, the King’s evil henchman, Marshal Tito, caught them. He grabbed the young man and locked him in the dungeon below the church on the island in the middle of the lake.

Once you reached the island, you then had to climb 92 steep stairs to reach the church. FYI – a groom wanting prove himself worthy to marry must carry his bride up those 92-steps (without dropping her!)

The Princess, being a head-strong young woman, wasn’t going to let her father, a mean bully like Mr. Tito, his guards, a heavy rowboat or 92-step steps stand in her way of true love. So one dark and stormy night……….

Welcome to Lake Bled! The land where time has almost stopped and you feel as if you have fallen into the middle of a fairy tale with damsels in distress, handsome princes and evil trolls.

Just looking out the windows during the bus ride from Ljubljana to Lake Bled gives you a hint that you are no longer on the hot, steamy shores of Croatia, but in a land where cool breezes blow year round, and a glimpse of snow can still be seen on mountain-tops.

We had been rushing from place to place almost from the beginning of our trip and were so hot and tired by the time we reached Lake Bled that we were hoping, actually praying for cooler weather and even rain – as we hadn’t seen a drop since we arrived in Paris on May 18th and it was now June 21st.

Our wonderful host, Blaz, was kind enough to pick us up at the bus station and take us to our lovely AirBnB where we would spend the next 4 glorious days. We found a delicious bakery only steps from our door which made homemade breads, salads, sandwiches and pizza! We had 2 large grocery stores only minutes away, and we could walk down the hill into town and the lake in only 10 minutes. Perfect. And, even better was the sound of rain on the living and bedroom skylights waking us in the middle of our first night.

We spent the first 2 days in Lake Bled doing nothing. We read, we napped, we cooked our own meals, I wrote, Joyce wrote, we listened to the rain and enjoyed the cool temperatures. Just what we needed!

On the 3rd day the sun appeared. They skies turned a brillant blue and we rushed out the door to do and see everything we could in the 2 days we had remaining.

We are here in the middle of summer so hiking, swimming and kayaking are the activities of choice at the moment. But in winter this place is a skier’s mecca. This is a photo I pulled from the web to show you just how beautiful it is when it snows!

Out the door we ran (slowly) and hoped on the hop-on/hop-off choo-choo that circles the lake. We caught the local bus up to Triglavski National Park and hiked the Vintgar Gorge. Lots of rushing water, really cool temperatures, waterfalls, and Joyce even caught a photo of a couple hugging just after he had proposed. (See red ring box clutched tightly in her hand.) What was really nice, and so environmentally-friendly, is they have built a raised, wooden walking path along side the gorge. No rocks to stumble over and no wearing down of the shore line.

We had drinks on the deck of deposed dictator Tito’s summer residence (now a very fancy hotel) just in time to see this stop’s bride. This is getting to be ‘a thing.’

Of course we rode in a pletna to the church on the island and saw just what hard and sweaty work it is to row 20 people in this heavy boat across the lake 30-minutes each way. (The rowers only make 3 trips a day). NOTE: The photo below of a bright, blue square is when I pointed my camera face down onto the water of the lake to prove it was really that color!

While in Lake Bled, I had one of the best hamburgers I’ve ever tasted, and Joyce met a fellow alum from Auburn named ‘Red’ at the bus stop where they had a great conversation about the just-fired president. It truly is a very wonderful and small world.

Before we leave Lake Bled I have to show you this amazing sofa bed. I know – but it really was so ingenious, and I want one!

I asked our host, Blaz, where he had bought it only to learn that it had come with the apartment when they purchased it a few years ago. They had it recovered but had no idea where the original owner had gotten it – but he promised he would find out and let me know.

A week after we left he emailed me to say that he had talked to him and guess what – it’s IKEA! So here are photos of this really comfy sofa/bed and what is so cool is that everything is connected. The cushions on the back and the sides of the sofa stay all together as you open it to sleep on, and it all folds right back up – no need to poof even one pillow. Unfortunately it was purchased in 2010, and IKEA no longer carries this model. Darn!

Before we boarded another very nice, clean and ultra-modern bus to take us to our next stop, Budapest, Hungary, I had to take one last photo of a quintessential, alpine Lake Bled home. This darling house, Villa Ana, was across the street from our place and is also a B&B.

One Reply to “SLOVENIA”