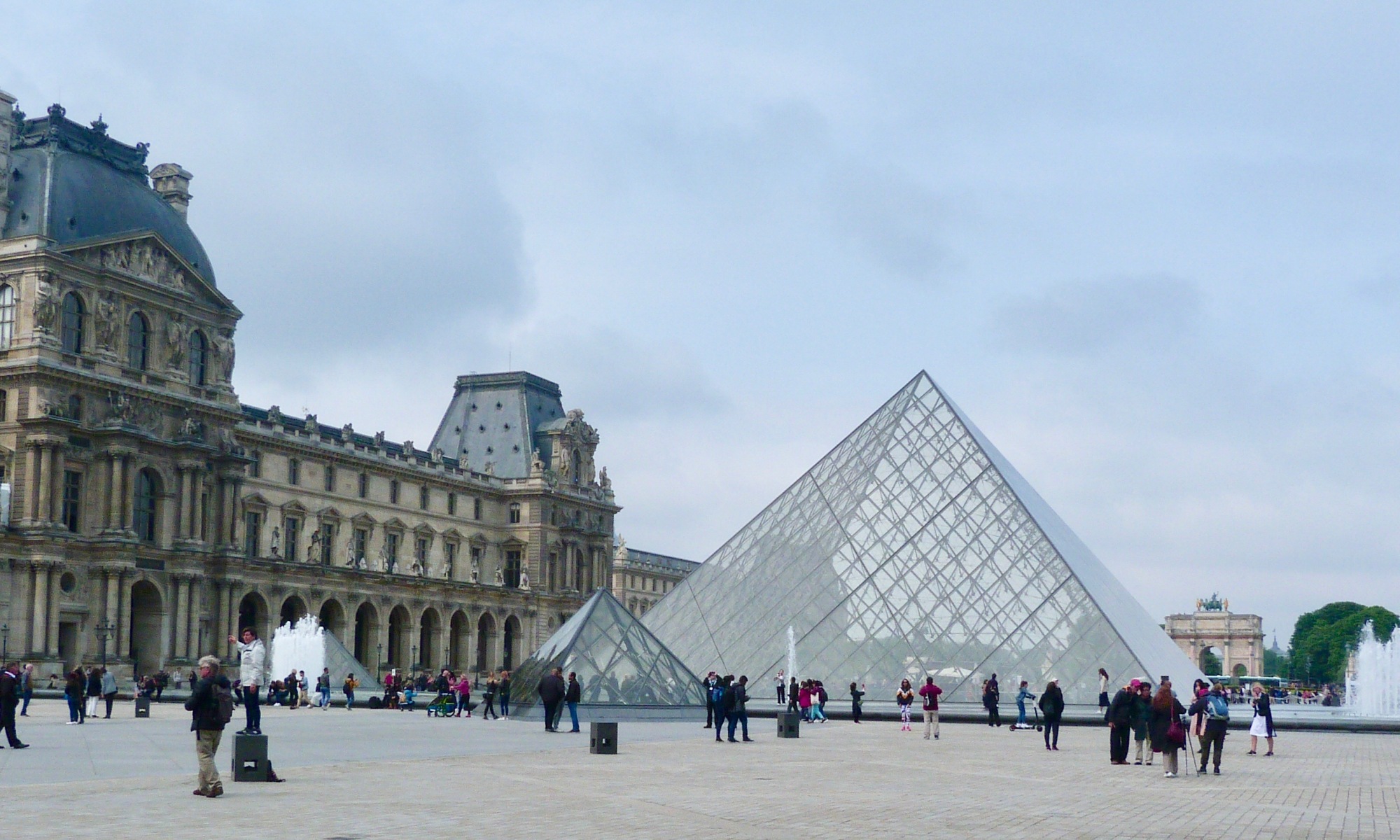 If you are going to celebrate your 73rd birthday and take, probably, one of your last, big road trips, then where better to begin than Paris?

I arrived safe and sound at Charles de Gaulle Airport from my overnight flight from NYC on XL Airlines (Air France’s budget airline). After grabbing my bag, I found the RER B train that would take me to the Gare du Nord and a 10-minute walk to our lovely AirBnB in Le Marais – 10th Arrondissement .

After meeting our hostess, Claire, I unpacked and took her advice to explore Marche San- Quentin, only a 2-minute walk from our front door. Everything you could need in the way of food – either to cook yourself or already prepared is available. Ethnic specialties, local goodies, fresh bread and fruits, oysters, roasted chicken, kabobs, quiche!

After a good night’s sleep, I was awoken by a knock on my door and my friend and traveling-partner Joyce’s arrival. After she did a quick unpack, we hit the street to pick up our 5-day metro cards (a must-have), explore the neighborhood, grab quick brunch and stock up the fridge at the Marche before getting dressed up and heading to Bel Canto, for a lovely birthday dinner.

Our waiters and waitresses are professional opera singers who performed their favorite arias for us between courses. I received a lit candle atop my yummy desert and I, and the others who were celebrating their birthday that night, enjoyed the most beautiful version of ‘happy birthday’ ever sung!

Joyce and I started every day walking to the Gare de l’Est, Gare du Nord or catching one of the metro, bus or train lines that were all within a 10-minutes from our door. Google Maps makes it so easy. It automatically entered our location and we would just type in where we wanted to go and it would tell us which train, bus or metro line to catch – with a map of where to catch it!

We agreed that we wanted to make the most of our 5 days in Paris, seeing and doing as much as possible. I will admit that we both found an afternoon nap was required after walking for hours each morning and heading out again each evening! Age, sore knees and bad backs have a way of telling you when you need to take a rest.

I always like to start any visit to a new city with a Free City Walking Tour. These are available in every major city of the world and offered by several reputable companies. The young people who are your guides are extremely knowledgeable about their city and love to share the history and stories that make it unique. They also can answer almost any questions you might have. At the end of the tour you ‘tip’ them based on how well you think they did.

Our central Paris walking tour covered a lot of ground in the 3-hours we strolled up and down the streets and across many of the bridges of Paris. From the neighborhood of the Sorbonne and our first view of the devastation to Norte Dame caused by the recent fire, to the Pointe Neuf, the Ministry of Justice, Arc de Triumph, Hotel du Ville, the Louvre and Tuileries Garden, we saw so much on the only cool, damp day we had while in Paris. The rest of the week was perfect! Sunny skies and temps in the low to mid 70’s each day.

Most days we would eat our big meal at lunch – stopping at one of the 100’s of boucherrie’s that line the sidewalks everywhere in Paris. Each would display it’s menu de carte and the price was normally around €13.50 for a 3-course meal with several choices of starters, entrees and dessert! Of course, a cold beer or glass of wine was added to make it complete!

But our favorite meal in Paris was at Bouillon Julien. We found it through an article a friend sent us from the New York Times with a list of the best – and cheapest places – to dine in Paris. The food was delicious, very French and very cheap by Paris standards. For 3 courses and a bottle of wine the cost was €25,

But….it was probably the most beautiful restaurant I have ever dined. Built in 1865 and completely refurbished by the owners, the stained-glass ceilings and wall paintings will take your breath away.

We shared this wonderful experience with 2 of the nicest young people who befriended us on another walking tour. Jared is an engineer from Vancouver, Canada and Kathryn is a landscape architect from Melbourne, Australia.

We loved the Musée d’ Orsay, an old converted railway station, with its view of the Sacré le Cour through it’s enormous clock plus the very famous Impressionist paintings of Monet, Matisse, Dega, and Seurat.

We spent a wonderful morning with Jacqueline, a lovely Paris Greeter, who provided us a free walking tour of the Left Bank area which she calls home.

We marveled at the beauty of churches (Saint-Germain des Prés), the tiny neighborhood shops, a flower-covered boucherie, the magnificent architecture of Paris’ architect, ‎Georges-Eugène Haussmann, the Hermés shop which is located in what was once was a public swimming pool, a quiet square tucked away from the hustle and bustle, street art everywhere and the faces of the people of Paris peaking out their windows.

One morning we visited Sainte Chapelle, built in 1248. This small gem of a church tucked behind the Ministry of Justice literally left me agag! I don’t know what I was expecting, but when I stepped out of the door from climbing up the circular stone staircase and into the chapel – pictures do not begin to do it justice.

From the Eiffel Tower where we chose not to wait in the sun for 2 hours just to get to wait again for the elevator that takes you to the top, we caught the #69 bus which crosses Paris from East to West and drops you at the Père Lachaise Cemetery. This massive, tree-filled, quiet oasis is the the resting place of some very notable people – Jim Morrison, Colette, Oscar Wilde, Balzac, and Edith Piaf – with estimates saying between 300,00 to 1,000,000 total burial sites. It was cool under the trees and if you love reading old tombstones and making up stories about the people and times they lived in like I do, then this is a great way to spend a few hours.

We did a guided, evening walking tour of Montmartre. This is the oldest neighborhood of Paris. It was originally a farm community powered by windmills due to its location on the highest hill in Paris. It is home to the famous Moulin Rouge where the original murals of Toulouse-Lautrec still adorn the entryway.

Surrounding the theater is ‘the red light district’, but just a few blocks away is a beautiful neighborhood where Vincent Van Gogh lived with his brother, Theo; where the only inside-the-city winery is located; where you find beautiful stand-alone homes (instead of the typical apartment buildings you see elsewhere); funky street art, gargoyles, and Le Sacré-Cœur Basilica sits atop the hill overlooking all of Paris below. This is where we met Jared and Kathryn, had a drink after the tour at an Irish pub and even saw a couple having their soon-to-be-family-wedding photos taken!

Open Door is the umbrella organization under which dozens of international women’s clubs around-the-world belong. I am proud to be the Open Door representative for IWA –International Women Associates of Chicago.

Throughout the many years I’ve traveled and countries I’ve visited, it is always a great treat to meet with the group of women who participate in their city or country’s Open Door organization. Thanks to Catherine Stephenson, Joyce and I enjoyed a lovely coffee and lunch with some of the members of the International Women’s Club of Paris.

On our last night in Paris we took an evening cruise of the Seine to see the lights come on all over the city. The setting sun gave Norte Dame an eternal glow and set behind the the spire of Invalides.

At night the Eiffel Tower become a glittering lightshow. We are so happy, along with everyone else who visits Paris, that they did not tear it down as originally planned at the conclusion of the 1887 World Exposition. Today it is celebrating it’s 130th Anniversary.

And we don’t know who left the bouquet of roses lying on the top of the embankment, but it seemed a fitting way to bid adieu to this City of Love and Light.

Until next time from Lisbon….