Pretend it’s now February 6th.  My time in New Zealand is drawing to a close – just one month a 2 days before my Visa expires and I my leave my home of the past 9 months.

The first thing I did after landing in Auckland was to catch a bus to Thames  – the town in the Coromandel where I had started my New Zealand adventure.  My ‘girlfriends’ had invited me back for a return visit.

The lovely Jeannette had put a Sold Out sign on her every-busy AirBnB room and I was thrilled to be her guest for 5 days.  We had so much fun ‘playing’ in her quilt/sewing studio.  I had a delicious dinner at Jean and Frank’s in TePuru, went to my morning exercise class at the Elam Church and Jenny, Elizabeth, Pat and I attended the Scottish Highland Games in Paeora.  Had my fill of bagpipes for another year!

←Jenny  ↑ Elizabeth & Pat
I’m amazed at Pat’s courage as her sight continues to fail and she ‘just keeps going!’ 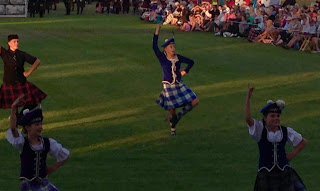 From Thames it was back on the bus to Auckland where I had one night downtown at the Attic Backpackers Hostel and time for a great Free Walking Tour of Auckland. 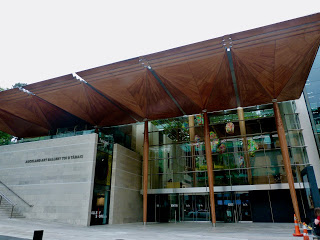 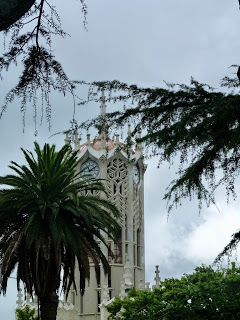 The next day I was joined by my good friend Kelly from Wellington.
Before I had departed her fair city, we had arranged to meet-up and bus to the northernest portion of the North Island – The Bay of Islands.

We left in sunshine but arrived in Paihia in rain – lots of rain!  Our hostel, Capt’n Bob’s Beach House, was not quite as close to the bus station as we were lead to believe. We had to drag our suitcases up and over and around a hill – about a 2km walk – through the rain.  We arrived wet and hungry but were happy with our large rooms, great lounge, and big kitchen.

We dried off, shook off the raincoats and umbrellas and headed out once again. This time it was another 2km wet walk to tour the Waitangi Treaty Grounds.  This is the most historical Maori-English site in New Zealand, where the treaty was signed making New Zealand an English colony.  We had a guided tour of the grounds, a performance of Maori music and dance and a very nice movie detailing the treaty. 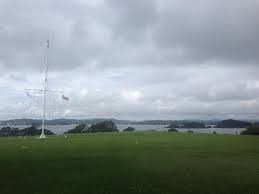 Flagpole designates the spot of the signing.
A hand-carved waka, traditional Maori boat.

The next day, still damp with light showers and cloudy, we scratched plans to spend the day on the water and took the ferry across the bay to Russell.  Russell during its heyday was where the whalers and prostitutes made their home, while the god-fearing Englishmen lived in Paihia.  To this day, Russell is a much more fun place to visit.

We took a fabulous Russell Mini Tour with a great guide named Bob!  This hour-long tour took us around and through and up to the highest point with a grand view of the entire Bay of Islands.  (Which I am sure is much better when it isn’t cloudy and wet!).  Back down into town and time for a hot, delicious bowl of seafood chowder at Sally’s before wandering around the town.

Love how Sally’s signs her name (in heavy cream) in the bowl of chowder!

Halleluiah!  The sun has returned.

We awoke to a bright, blue sky and decided to split up for the day.  Since I had done so many tours on lakes and sounds, I chose to see something truly unusual (thank you, Susan Hayden, for the suggestion) while Kelly chose to spend the day boating around the islands.

I hired a taxi to take me to Kawakawa,

the home of the Hundertwasser Toilets. Yep, I went out-of-my-way and had to hire a cab to be able to see a public toilet! But oh my, what a toilet.

Known as an international work of art and a huge tourist attraction to this small town, the toilets were designed by the expatriate Austrian artist, Fridensreich Hundertwasser using recycled materials from the local community. 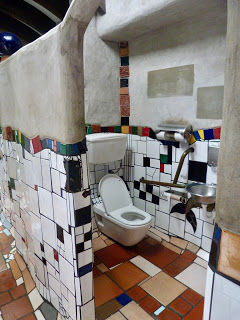 This was a total delight to the eyes! And what was sad to learn was at the time the ‘city fathers’ really didn’t appreciate Mr. Hundertwasser’s work, so when he volunteered to do more installations in other locations throughout the Bay of Islands, they turned him down.  What a shame, as they now see large numbers of tourists visiting their fair town specifically to see ‘the toilets!’ Now, of course, the town has now embraced the mosaic art form and other pieces of artwork fill the streets and line the walls! 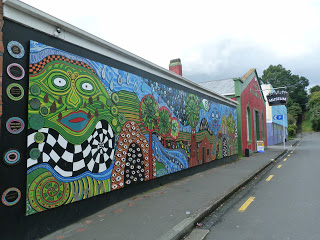 When my taxi driver returned me to Paihia, I chose to ferry back to Russel and have a leisurely lunch overlooking the water.  After lunch, I did a little shopping, toured the original church and it’s graveyard while falling in love with their congregation-needle-pointed seat cushions,  then just sat in the shade and read a good book!

My ‘smiley’ ferry boat. (click to see a bigger photo and read the sign)  And as you can see, I was not the only who chose to lunch on the waterfront.

Kelly’s cruise boat dropped her in Russel at the end of the day and we had a lovely glass of wine and nibbles at The Gables (overlooking the water) before we found a really wonderful wood-fired ‘ pizza garden’ hidden in an alleyway where we enjoyed dinner before taking the ferry back to our hostel for our last night in the Bay of Islands.  Early morning return bus ride to Auckland in the morning.

I  planned to finally spend the next 4 days before my tour to Rotorua and final housesit began exploring New Zealand’s largest and busiest city. That didn’t happen.

Thanks to tromping through 2 days of rain, for only the 2nd time in 9 months I came down with a terrible cold – and fever – to the point where a trip to the emergency room became a necessity.

I was staying in one of the loveliest AirBnB’s in the beautiful Auckland suburb of Remuera with a wonderful hostess named Judie.  She was kind enough to move me to a room (away from everyone else!) and made sure I had plenty of tea and good care.  When it was time for me to head to Rotorua, the antibiotics had kicked in and I was finally on the way to getting well.

This has gotten much longer than I thought it would be – and my friends at Starbucks are looking at me like it’s time to move on….So I will add a Part 2 within the next day or two.  It will be my farewell to New Zealand!

One Reply to “RETURN TO THE NORTH ISLAND – Part 1”