On January 19th I completed my holiday housesit and flew from Wellington to spend the next 3 weeks exploring the south half of the South Island.

I spent the first week in Dunedin at the wonderful hostel, KiwisNest. With a corner room all to myself, the staff even brought me in a desk and chair and I made myself right at home.  The upper left corner room was mine! 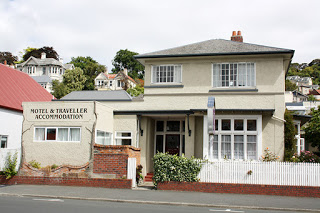 Dunedin is the 2nd largest city on the South Island, after Christchurch.  It was settled by Scottish settlers and named after Edinburgh, using the Galic which translated to Dunedin.  As early as 1770, Lt. James Cook stood off shore overlooking the harbor and reported many penguins and seals in the area.

Dunedin is the home of New Zealand first university, founded in 1869, the University of Otago, which today is the largest area employer.  And it’s located just around the corner from my hostel!  I spent many a rainy day exploring the bookshop, art museum and having a coffee in the union chatting with the students and professors.

The center of Dunedin is called The Octagon.  This is large, octagon-shaped (sort of) area right in the center of town with a nice-sized grassy area in the center, is bisected by ‘the main drag’,  topped off by the Cathedral and surrounded by restaurants, museums, movie theaters and the always helpful iSite.  As you can imagine it is the gathering/meeting place for anything happening in the city! (More about that later). 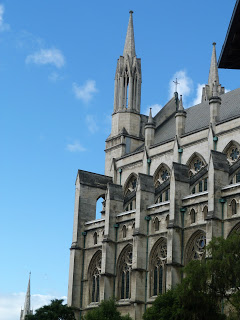 Above is a side-view of the Cathedral and my favorite window I found in a small nave inside – honoring the areas seals, penguins, and albatross!

I as I mentioned, twice now, Dunedin is the one place you can see albatross, little blue penguins and seals in their natural habitat.  I signed up for the afternoon/evening/nighttime tour to the Albatross Center. 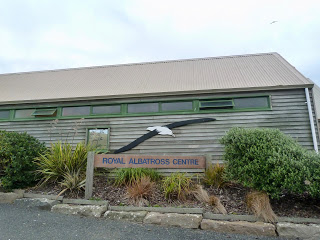 I was driven an hour along the coastline where I boarded a boat with approximate 50 others, including a great group of students from the University of Rhode Island.  It was a very rough, windy and wet day and OMG, the boat provided everyone with fleece-lined heavy-duty raincoats.

We motored out into the bay to be able to see the magnificent albatross in flight.  I really didn’t know much about these magnificent birds so here’s what I learned –

The albatross is a VERY large seabird. They range widely in the Southern Ocean and North Pacific. They have the largest wingspans of any extant birds, reaching up to 3.7 meters (12 feet).
I know seeing a photo of my backside is not very exciting but this gives you a good idea and just how big their wingspan is.

What make them so amazing is that they leave their land-based homes for a year – or more! – and never again touch ground until the return.  They have developed a ‘soaring technique’ that allows them to ride the wind, walk on water to scoop up food in their unusual-shaped bills. They also can drink seawater and rid their bodies of the salt via tubes (long nostrils) that run alongside the side of their bills and excrete the salt but also allow them to measure their exact airspeed (just like modern aircraft do!)

When their return to land it is to specifically mate.  Land is an uninhabited,  exposed headland with easy access to the sea from several directions.  They are ‘late bloomers’ and can be 10 years old before they first mate.  Albatross normally live 50 years old.  The oldest recorded one, a female, lived to be 66 years old.  I could go on and on, but just read the wonderful information on Wikipedia!   Just seeing them flying overhead and nesting was such a wonderful experience.  And FYI, they are an endangered species.

The Colony has a ‘live cam’ each year on one of the nests.  So cool!  As you can imagine, they lay BIG eggs. 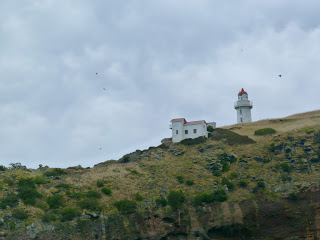 After getting off the boat we climbed up to the top of the point where they have built an observation center where you cannot talk but can observe these magnificent birds doing their mating dance, raising their hatchling, or just taking an extremely clumsy running leap off the edge of the cliff, catching an updraft and filling the sky with their sheer size. 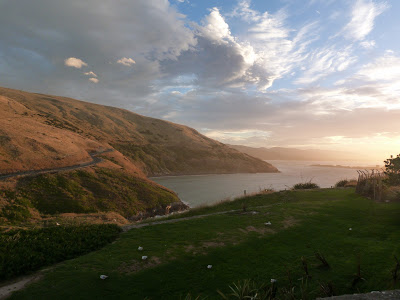 After a enjoying a beautiful sunset over the inlet, we were treated to a very nice fish ‘n chips dinner in the Center’s cafe while we waiting for darkness to fall – the time when the little penguins return from their day in the sea and come onshore to spend the night in their nests built among the rocks.

This is what these little darlings look like when standing still in the daylight (thanks www for the photo!) Below is what they look like coming out at the water in mass at dusk. 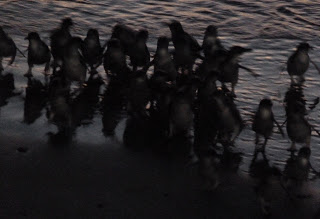 Before ending my week in Dunedin I had the great privilege to join the organizers and help with the plans for the January 21st, worldwide Woman’s March.  For a short time, I was part of an amazing group of women. They hoped they might have 150 attend their March and were thrilled beyond belief when over 450 men, women, and children, many wearing ‘pussy hats’  showed up at The Octagon on the beautiful, sunny Saturday morning to listen to speeches and music,  show their solidarity and share their concerns with women from around-the-world. 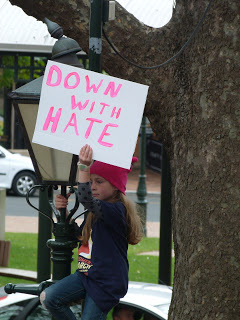 What an ending to my stay in Dunedin.  Now it’s onto Queenstown.