This metal statue balances on the edge of Wellington harbour.  He has a grimace on his face that is hard to interpret.  Is he grimacing at the force of the winds that whip this city almost constantly – giving it the name Windy Wellington. (120km just this past week).  Sometime it is  quite hard to maintain one’s grip on the sidewalk.

Perhaps his grimace is from the number of large cruise ships (the Ovation of the Seas – 4180 passengers & crew) that arrive in the harbour almost daily now that summer (supposedly) has arrived, their numbers clogging the streets, restaurants, and attractions, making life in the CBD miserable for those who live and work here.

Reminds me, not in a good way,  of my time in the Peace Corps on the island of St. Kitts/Nevis and how their economy was almost totally based on the income from these massive floating cities. Have you guessed I’m not a fan?

(http://www.reanninstkitts.blogspot.com).
Or perhaps his grimace is one of trying to understand and comprehend the changes and upheavals in the world that slowly, but inevitably make their way to this beautiful and peaceful country so far away from the rest of the world.
I don’t have an answer, but I do love to sit on the edge of the harbour next to this man and contemplate what sort of future I’m facing and don’t doubt that I too have a grimace on my face.
But for now, let’s leave the future in the future and let me fill you in on what I have seen, done, met and been since I last sat at my computer and wrote on this blog.  I am going to divide my 3-months into two separate blog posts, ‘Wellington’ and My Travels Outside Wellington.’
I have been a guest in the wonderful city of Wellington for 3 1/2 months now.  I arrived on September 30th and I will depart this Thursday, January 19th.
My first day here, my hosts for my first 3 months, Paul and Nigel, drove me to the top of Victoria Peak so I could get a magnificent overview of the city and the harbour. 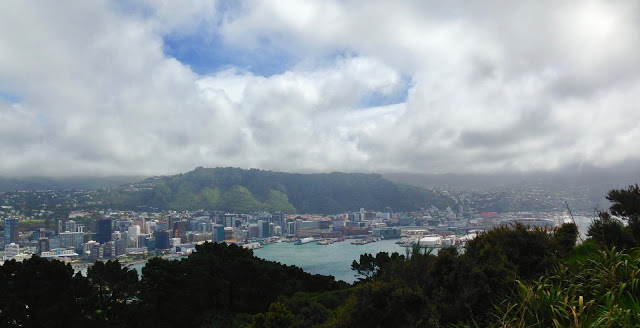 Wellington has been ranked, year-in-and-year-out, as one of the top-ranked ‘World’s most livable cities.‘  I have to agree.  The public bus system is outstanding and it’s a very walkable city (if you like climbing up and down hills!). The residents are friendly and welcoming and the 2nd day I was here, I attended an opening for the upcoming annual Lit Festival and had a lovely chat with the then mayor, Celia Wade-Brown.  How many mayors of large cities do you know that get around their city using pedal power?
Wellington is the capital city of the country of New Zealand, with it’s Parliament and government offices housed in what is known as ‘the Beehive.’   The adjoining office building and library are the main headquarters of the government.  Note that there are no armed guards or fences or barricades anywhere.  The only restriction was not taking photos inside.
I thoroughly enjoyed a 2-hour free guided tour of these building, learning how the New Zealand form of democracy still retains ties to its British homeland, but has made changes to embrace its Maori heritage and provisions to provide for healthcare and retirement benefits for all of its citizens.  It was the first country to give women the right to vote and to recognize gay marriage.
My favorite bit of information I learned while on the tour was that after several years when members of their Senate body accomplished absolutely nothing worthwhile, they chose to totally eliminate this part of the government!  They now have only a House of Representatives that oversees the rules, regulations and makes the laws of the land.  I think the US should take a long, hard look and perhaps do the same! 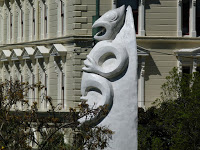 The CBD (Central Business District) curves around the harbour with wide sidewalks bordering the streets, plentiful buses running from one end to the other and a fabulous walkway along the harbourside.  Churches, galleries, shops, artwork and coffee shops too numerous to count (Wellingtonians LOVE their coffee – and that means NO Starbucks!) fill the streets.

You wander the streets and find such interesting and unusual pieces of art.  The clam shells, while pretty, were also the landing place of a man who jumped off the top floor of the building next to where they are located.  It didn’t end well for the man – but the clam shells, as you can see,  survived.

Cuba Street – My favorite street in downtown Wellington is packed with small boutiques, wonderful restaurants, and weird artwork, including this water wheel which children and adults play in on hot days.  There are alleyways filled with surprises like the Paradise used bookstore that goes on and on and on and the Lighthouse Movie theater with its huge, comfy lounge seats where you can enjoy a glass of wine or cup of coffee while watching a first-run movie.

The waterfront is alive with shops, Maori carvings, these great sign-holders, metal palm trees, the fabulous City to Sea bridge, a lagoon and so much more. 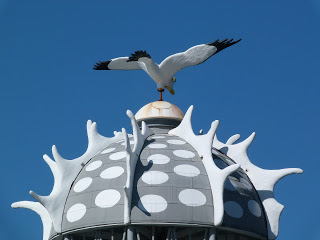 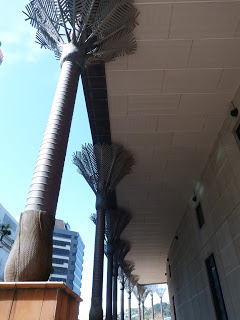 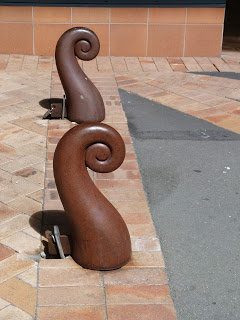 When you’re tired of the hustle and bustle of downtown, you can hop the cable car and ride to the top where the glorious Wellington Botanic Gardens are located.  From the top you can slowly stroll back down, through 4 distinctive gardens, enjoy seeing some of the most beautiful and usual plants, stop for a lovely lunch at the cafe in the center of the rose garden, or stay late and enjoy a free concert at the SoundShell. 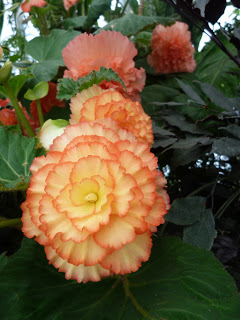 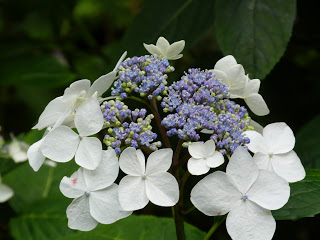 During my time in Wellington I attended the 2016 WOW production (more about WOW later) , been invited to parties, attended organ and choir concerts, was welcomed into the homes of perfect strangers for drinks and dinner, enjoyed many new movies, celebrated the holidays with new friends (Guy Faulks, Halloween, American Thanksgiving, Christmas and New Years), attended a holiday cocktail party at the home of the American Ambassador to New Zealand, was a volunteer server at the annual Thanksgiving lunch for the homeless and less fortunate of Wellington, got my own Wellington Library card, learned to say ‘ta’ for thanks and call my new friends my ‘mates.’   Learned to crochet a granny square (thanks YouTube), bought too many pairs of shoes, had to honor of hearing Secretary of State John Kerry dedicate the American/New Zealand War Memorial, went to several gallery openings, ate Pavlova (really sweet), was invited to holiday faire at the British Consulate, and attended a great concert on the Lagoon and fireworks to ring in the New Year. 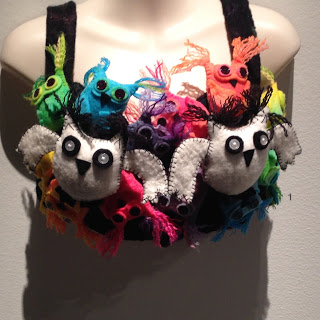 A Creative Fibers’s exhibition and Christmas Concert at the Cathedral 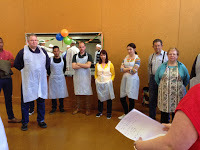 The British Consulate Holiday Faire with dancers from Wales and Scotland 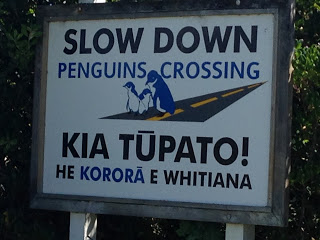 My favorite sign on the far side of the city – as yet no penguins sighted! 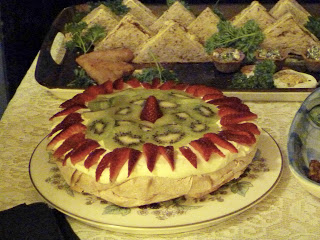 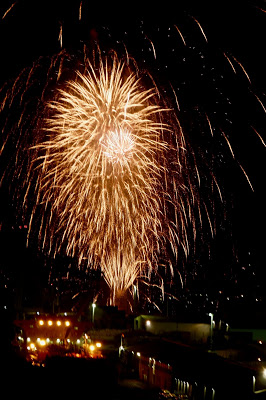 Guy Faulks fireworks over the harbour! 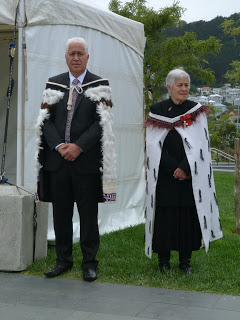 New Year’s Eve on the Harbour!

But there were three other exceptional events that happened since I arrived in Wellington.

The first and one that I will cherish long after I leave New Zealand, has been meeting and enjoying the friendship of Kelly Wright and Jenny Taylor.  Kelly is the mother of the woman who’s home and pets I am housesitting while she and her family are in South Africa on holiday.  Jenny is a friend of Kelly’s.

They have made my stay here feel more like home.  They have picked me up and taken me here, there and everywhere, including me in their everyday lives.  You don’t realize how much you need friends, especially ‘girlfriends,’ when you are away from home.

The 2nd most exceptional event that happened since I arrived is I lived through a 7.8 degree earthquake!  This was no small event.  It closed major roads, destroyed homes and wrecked havoc with many of the high rises in downtown Wellington.  Lots of broken windows and quite a few building being taken down because they are no longer deemed safe for occupancy.

I woke up to my bed swaying back and forth, The Boys screaming to get out of bed and stand in a doorway, and me thinking the house was going to fall off the cliff any second and we were going to land in the harbour!

Well, the house and I survived – and I managed to live through some pretty severe 5.5+ aftershocks during the next several weeks.  I came to the conclusion that I do not like earthquakes.

I have lived in areas where tornados and hurricanes where prevalent.  They are signs let you know when one is coming and there are actions to take to survive one of those.  Earthquakes are totally unpredictable and there are absolutely no way to survive a really big one.  The TV commercials tell you to get under a table and  duck and cover!  I haven’t heard something like that since I was in grade school and we were practicing for the next nuclear bomb attack!  I love New Zealand but the entire country was built up by volcanos along a major fault line, not to mention the tectonic plates that shift to-and fro just off the coast!   It’s a country that knows what it means to ‘rock ‘n roll!’

And lastly, but the most exciting event that has occurred since I arrived in Wellington is the birth of my second grandchild.  This time a boy, by the name of John Tobin Scott.  He arrived just before Thanksgiving and is beautiful. Mom, dad and sister Stella are thrilled (well, leave Stella out of that equation) and he is growing big and strong and I can’t wait to meet him when I return in April.

I think this is enough for one blog post!  I know for a fact that I have missed so many things I wanted to include that I have seen and done, but I’ll just come back and add them later.  Next up  –  the places I’ve traveled while using Wellington as my home base during the past 3 months and the wonderful places and pets I house sat.

PS: I had hoped to get my entire stay in Wellington written up before my departure on the 19th, but I woke up with a ‘black screen’ the other morning which called for a frantic visit to The Apple Guy and my little MacBook Air requiring an overnight stay which threw my writing schedule into a whirl.  So once again I will be a bit behind in my travel reporting…..oh well!