Skip to content
MELBOURNE
After 4 glorious, if extremely jet-lagged sunny days and nights in Sydney, it was time to catch an early morning flight to Melbourne where I had agreed to a 3-week house/pet sit in the suburb of Carnegie. (Car-NEIGH-geee).
I landed on a very wet and soggy day and found the airport shuttle bus into the City Centre (CBD) without a problem.  The Aussies like their signs and they are plentiful and very helpful.  I was being met by my homeowner, Scott, at the main train depot.  He knew what I looked liked from photos on the Trusted Housesitters’ website, while I was willing to be picked-up by a strange man!
Everything went smoothly as Scott, an IBM exec, was waiting to help me with my luggage and also give me a brief tour of the CBD before we caught another train to Carnegie.  We hopped on a local tram and headed to Federation Square,  a huge, public space whose buildings are very architecturally unusual. 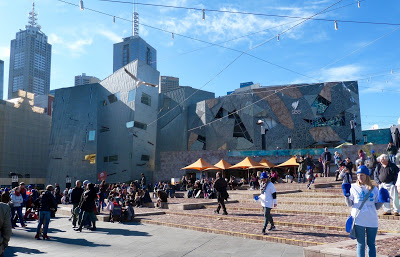 Within Federation Square is The Atrium, a 5-story glass-shard enclosed event space. 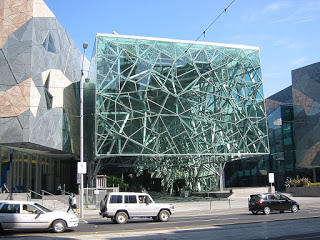 There is also a Civic Center, The Edge Theater, The National Gallery of Victoria, SBS Headquarters, The ACMI –Australian Center for Moving Image -which was showing a Scorsese retrospective, ZINC – another performance and event center, a massive outdoor theater screen AND the Melbourne Visitor’s Centre – which is where we were headed.   Scott wanted to make sure I had enough maps of the area and a list of things-to-see-and-do to keep me occupied for the 3 weeks they would be gone.

We left  the Visitors’ Center with at least 5 pounds of books and brochures and enough ideas and suggestions of what to see-and-do for the next 3 years!   After a quick lunch, we headed to Flinders Station where I purchased a refillable transit pass good on all trams, trains and buses during me stay.
I must say was a little surprised how extremely modern the condo was where I would be staying while caring for my small charge Moxie! 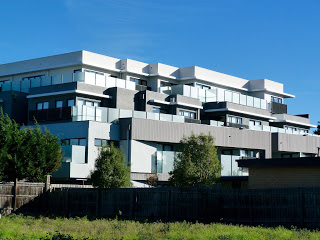 Everything was push-button and digital.  After a quick lesson on which buttons to push to make what work (ha – that didn’t work!)  Scott flew off to join his wife Julie and two daughters, who had proceeded him to Europe, and start their family vacation.

Moxie is a small dog – not really a long-haired chihuahua, not really a miniature terrier –  just tiny and very yippee and not a cuddlier.  She seemed to be happiest when dressed 24/7 in her pink fleece coat. and snuggled in one of the 6 doggie beds scatted throughout the house.  But her greatest joy was to stand outside, behind the fence, and bark loudly and continuously at anything or anyone that passed by.  I emailed the owners to ask if there had been complaints from the neighbors about her barking but was informed that everyone in the building worked, so no one was home to complain.  So I let the little darling bark as long as she wanted – until I couldn’t stand it any longer.

For a small dog, Moxie had well-developed kidneys, being used to Scott and Julie being gone during the day.  This allowed me the opportunity to go off and explore Melbourne for more than just a few hours at a time  – Yeah!

On first bright and sunny day (it is very wet and a bit chilly down here, as it’s the middle of their winter) I headed into Melbourne’s CBD to meet up with the folks at I’m Free Walking Tours for a 3- hours tour.

Melbourne is Australia’s oldest city modeled after a typical English capital city. The buildings are stately and large, the sidewalks are broad, the trees are huge and everywhere,  the museums are excellent and plentiful, and the transportation options are numerous, on-time and will take you anywhere you want to go throughout the city and surrounding suburbs.  Melbourne has a huge and diverse ethnic population (the largest population of Greeks outside of Greece and a lovely and large Chinatown.)   Below are just a few of the photo’s I took on my tour and during the many subsequent trips I made into Melbourne during my 3-week stay. 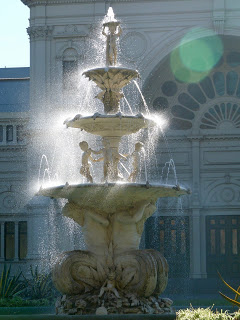 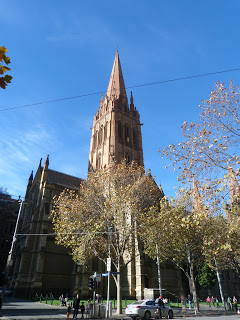 Founded in 1831 and situated on Port Phillip Bay, Melbourne is the perfect walking city as it’s completely flat. When you aren’t even looking, you find some fun and unique public art, great craft markets and hysterical safety posters! Melbourne soon became one of my very favorite cities of all those I have visited. 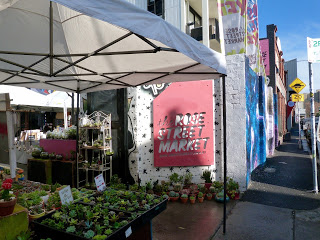 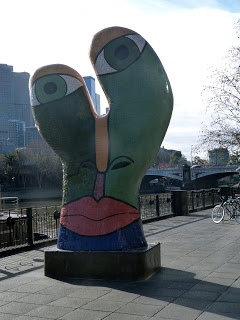 But the very best thing that happened during my stay in Melbourne was meeting Angela Daley.  Her husband’s job had taken them to Chicago, which they called ‘home’  over a year. While there she found and joined my favorite group, International Women Associates (IWA).  They had returned home to Melbourne just before I arrived and we both had received emails from mutual friends telling us that we MUST connect.  They were right – it was instant friendship!

Angela lives in a beautifully restored Victorian row house within walking distance of the CBD where she still works as a legal librarian (very part time). 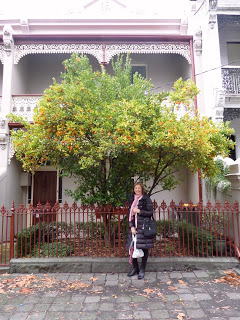 For our first meeting, I trained to her side of town and she gave me a tour of her neighborhood before having a delicious lunch in her lovely kitchen.  Once we got started talking we couldn’t seem to stop and lunch went on for literally hours!  She finally put me on the train to home but not before she had introduced me to one of the major reasons to live in Melbourne,   The Queen Victoria Market

What started as a fruit & vegetable market soon added meat and fish halls, fresh fruit and soon The Elizabeth Shops were added to showcase crafts and house goods.  And then there are all the eating options.   Name a type of food or nationality and you will find it at simmering, steaming or grilling at The Queen Vic.

But what blew me away was the Deli Hall.  OMG!!!  If I could move in here and never leave, I would.  I have never seen so many beautiful and delicious displays – salamis, cheese, olives, sweets, and breads of all shapes and sizes, etc. etc. etc. 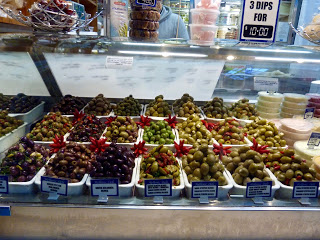 On another sunny day, and our last day together, Angela suggested brunch downtown overlooking The Yarra River then a visit to an outdoor craft fair before hopping a tram (where I forgot to look left first before looking right and almost ended up in the tram drivers lap!) out to St Kilda.  This quaint, seaside suburb is great for sightseeing.  We had a chance meeting and a long chat with  a very talented Aboriginal artist at work, did some shopping, and stopped for  a hot coffee and tasty sweet to recharge our depleted batteries!

It was a perfect day, but so hard to say goodbye to my wonderful new friend

My 3 weeks had flown by but just before leaving Carnegie I stumbled upon this tiny, corner coffee shop and absolutely had to stop and ask why?????…..it’s named for, features pictures on the wall of, and even has a jar to raise money to bring its namesake, comedian, actor, gopher-loving and golfer-extraordinaire BILL MURRAY to Carnegie, Australia! 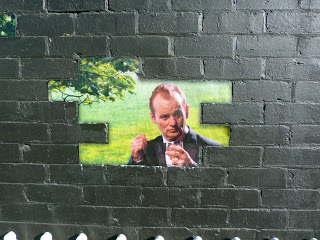 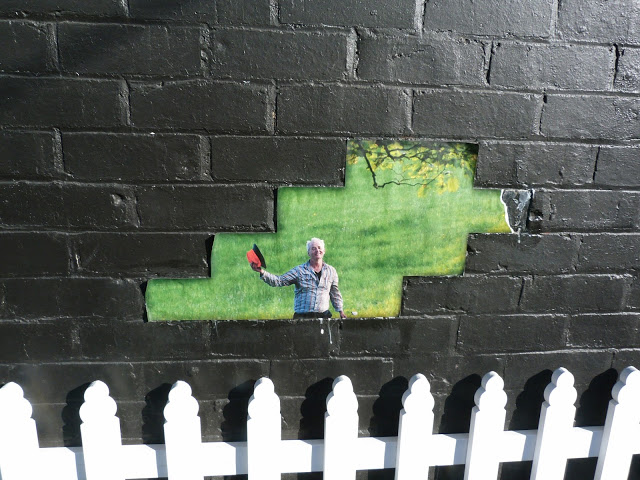 It turns out the owner is just a great fan – whose name also happens to be William Murray.  He has already arranged for great accommodations for Bill, will get tickets to a rugby match and of course, a provide a few rounds of golf on the area’s best courses.  Now all he has to do is raise the money to cover all this (plus the airfare).  Oh-  and then talk Bill into coming!

Hey Bill, as a fellow Chicagoan you should come on down! You will love Australia, adore Melbourne and enjoy meeting the fabulous people who live here.

But now the time has come for me to say farewell to Australia and head to ‘A Land of Two Halves’.
Until next time in New Zealand……