During December, in the middle of the holiday season, I took two one-day trips to visit the village of Porches, the home of Portuguese pottery, and Faro, where I found an ancient walled city within the largest city in the Algarve.

First was a visit to Porches, thanks to friend Dick and Anita and their rental car. Porches is one of those quintessential whitewashed villages (pop. 2000) with cobblestoned-streets, friendly people, and restaurants that are open only now and then. After exploring the village, we were directed to a typical Portuguese restaurant outside of the village for a delicious Plate de Dia for €8.50.  It included spinach soup, a nice salad of greens, fresh tomatoes, and onion, a choice of 3 entrees (I had chicken which came with the always-present boiled potatoes) your choice of a drink (coffee, beer or wine) and I think a desert.After filling our tummies, it was time to make use of their wonderful TomTom (a GPS device is a Must-Have in Europe!) and find the Nossa Senhora da Rocha Chapel and Fortress.

Perched on a crumbling cliff-point sticking straight out into the Atlantic, this small chapel, where an apparition of the Virgin Mary was supposedly seen by local children many 100’s of years ago, it still draws pilgrims today.

This area was conquered by the Romans and then the Moors in the 13th century. As you can see, it is the perfect location for a castle to protect the area from whomever else tried to take this land.  In the 16th-century, a fortress was built on this point, along with the chapel.  The last remnants of the fortress are crumbling into the sea and the chapel may soon join them as this point is getting smaller and smaller each year and the edges are now fenced off to protect the visitors, something you never see in Europe. 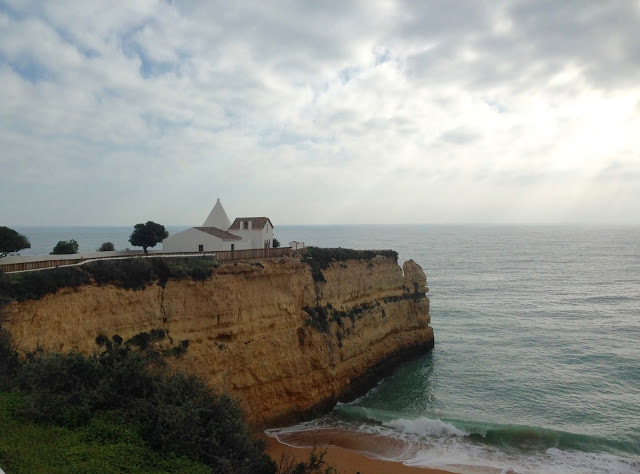 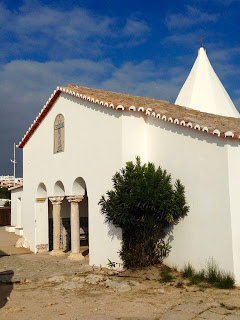 It was now back into town to visit just a couple of the numerous potteries that line the roadway.  We visited a very traditional pottery which is carrying on the hand-painted old-style designs to more modern one which reminded me of Pottery Barn, to a really fun and funky sculpture garden, it was a great afternoon. 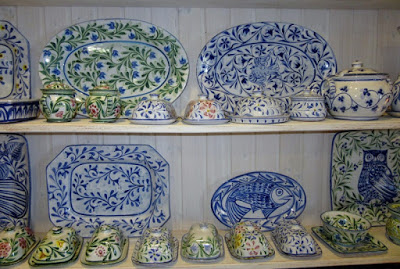 We completed our day with a visit to Jouk’s Designer Sale, a wonderful, German woman who imports some of the best European designer clothes and jewelry and has a sale in her home twice a year.  Both Anita and I shopped a lot and enjoyed ourselves immensely – Anita even got her hair cut by the on-site hairdresser!  Dick was REALLY bored.

Faro, which is situated on the Formosa lagoon attracted human occupants from the Palaeolithic age until the end of pre-history. The first settlements date from the 4th century BC, during the period of Phoenician colonization of the western Mediterranean. At the time, the area was known as Ossonoba and was the most important urban centre of southern Portugal and commercial entrepot for agricultural products, fish and minerals. Between the 2nd and 8th century, the city was under the domain of the Roman and later Visigoths, before being conquered by the Moors in 713. From the 3rd century onwards and during the Visigothic period, it was the site of an Episcopal see of the Christian church.

Under the Moorish rule, the community grew and developed in economic importance with merchants, artisans and especially book-printing.  Samuel Gacon began printing the Pentateuco in Hebrew, the first book printed in Portugal in 1487. With it’s large and mix-religious community, the city continued to flourish until the15th century when Manuel I ordered all of the Jews out of Portugal. The city went into a dark period but when Alphonso III regained rule.

During the following years, the town became a prosperous position along the Algarve, due to its secure port and exploration of salt and produce. At the beginning of the Portuguese Age of Discovery, the town was positioned to be a commercial centre that it remains today.  (WinkipediA)

Armed with this knowledge, off I went to visit Faro with part of my Portuguese family, Joáo, Rosalina and Maria Joáo.  Joáo, who had lived in Faro for quite a few years when he was growing up, wanted me to see many of the churches and also stroll about inside the walled city that is still an active part of the city today.  Though breezy and not a sunny day, we enjoyed our time exploring and then getting terribly lost trying to drive out of the old city at the end of our visit.

This post concludes my month of holiday celebration and travels.  Next up – SPAIN!  Visits to Granada and Sevilla.

One Reply to “PORCHES & FARO”