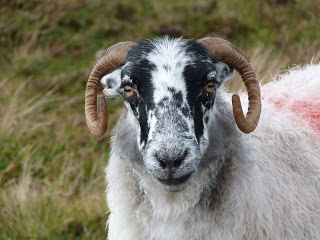 Did I mention that almost everywhere you go, you’re being watched?  These wooly guys are literally wherever you look – on a mountaintop or in a valley, usually with a splash of colored spray painted on them designating who they belong to.
After a lovely sleep and another full Irish breakfast, tops on my bucket list was a stop at  Sliabh Liag (Sieve League), the highest marine cliffs in Ireland.  If not as rugged or as popular as their southern neighbors, the Cliffs of Moher, these were rumored to be more beautiful.
But along the way I wanted to stop at the Fr. McDyer’s Folk Village, completely  reconstructed and furnished just as the homes and shops were in Glencomcille when they were built and occupied in the 18th, 19th and 20th centuries.  Fr. McDyer arrived in 1951 and totally changed the village, lobbying for electricity, organizing local industry and thus stemming the flow of immigration out of the village.  It was an eye-opening way to see what life in this little village was like so many years ago and how much it has changed in some ways and others, not at all. 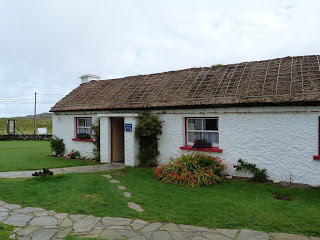 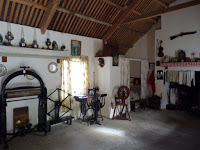 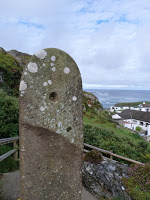 This area is known for it’s knitting mills and shirt making factories.  I made a stop at Rossan Knitwear where I could have purchased sweaters for every member of my family but didn’t.  But if Fisherman Out of Ireland had been open, I would have bought everything they had!  What wonderful knitwear this local company designs and sells.

Now it was time to drive to the top of the cliffs.  I was told not to use the car park at the bottom but open the cattle gate and drive up to the very top (2000+ feet) and I would find another car park there.  Let me tell you how much a 4-cylinder Kia does not like going straight up – and neither does its driver!  Again, an extremely narrow, one-lane road going up and up and up, all the way to the top of the cliffs.  I started in 2nd gear but had to shift down and did the majority of the drive up in 1st, gripping the steering wheel so hard I had to pry my fingers off when I finally reached the top. 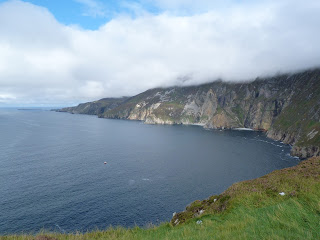 I stepped out of the car and was greeted with the above view. The morning fog was hugging the very tops of the cliffs, but the sun was shining brightly and it soon disappeared and welcomed a gloriously clear day. 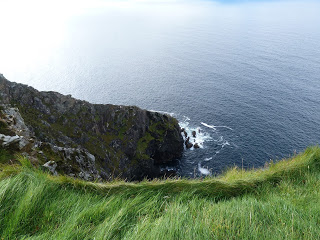 I chose these two photos specifically to show you that OSHA hasn’t been heard of in Ireland – or Europe for that matter.  You can easily put yourself in my shoes and imagine where I am standing to take these photos.  Do you see any fences or guard rails protecting the observer from falling off the cliffs?  In the States, we wouldn’t be able to get within 20 ft of the edge but I wasn’t even 20 inches. European countries believe you should be smart enough to make decisions about your personal safety and it you do fall off the edge, then stupid you, it isn’t their responsibility.

Sieve League (Sliabh Liag) was absolutely beautiful.  It was well worth the drive up and the almost-as-scary ride back down.  The weather gods cooperated and it was a perfectly beautiful day.  What else was amazing was the sea – it was completely flat – like a mirror reflecting the sky.  The normally ‘wild’ and angry Atlantic was taking a breather and enjoying the calm day as much as I, and the rest of the sightseers were. 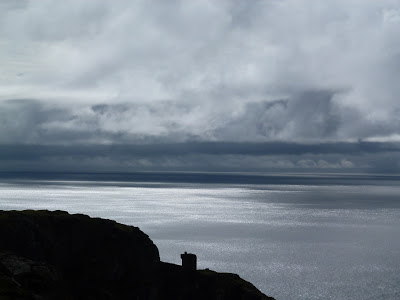 After a drive through the town of Donegal and around the O’Donnell stronghold, I followed the WWW signs to Bundoran-on-the-Sea where I would spend my last night on the Wild Atlantic Way at Rockpool House Air BnB.  It was raining and cold but I had dinner at the great pub.  Everything is better with a delicious hamburger, chips, and a pint.

The next morning  I turned away from the west coast of Donegal and headed toward Dublin with my destination being the village of Virginia in County Caven.  I had been invited by a friend to stay at her ancestral home and be part of the celebration of her 70th birthday.  Along the road, I just happened to see a sign that said Castle and I did a quick u-turn and was thrilled to find not only the ruins of Tully Castle but had the entire place all to myself! 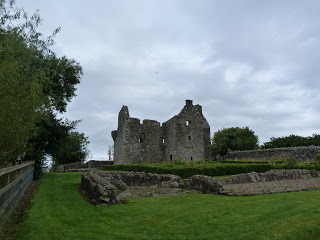 I would spend the next 6 days in a lovely, 18th century home, still a working farm, helping to chop, cook, clean and get ready for approximately 100 guests, and then assist in the clean-up afterward.  This was my way of ‘re-paying’ for the owner’s generous hospitality. 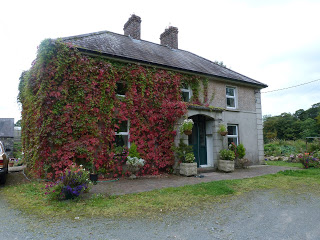 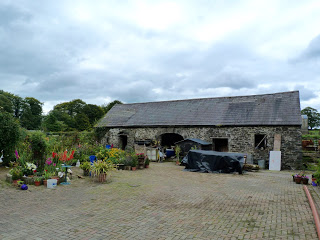 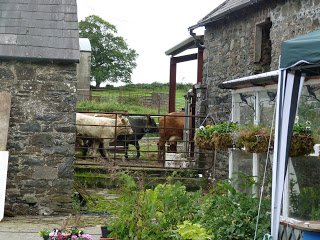 The party was a great success.  Plenty of food, plenty of whiskeys and strong tea, and plenty of music and song.  I didn’t make it till when the last guest left at 3:30 a.m., but I did fall asleep with the sounds of a beautiful Irish tenor voice drifting upstairs and into my room. 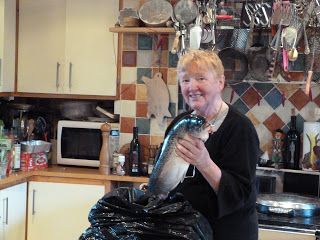 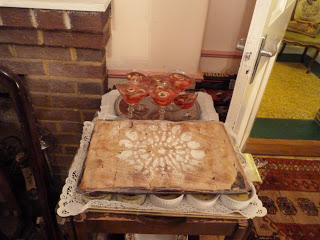 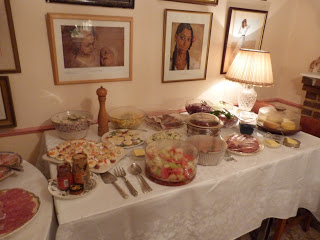 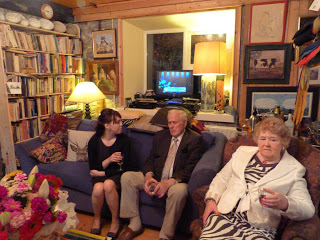 My next-to-last-day my hostess’ wonderful sister-in-law offered to take me to the Loughcrew Passage Tombs.  These Neolithic tombs were built about 3000 BC and have recently been partially excavated. Like Newgrange which is only a few miles to the south, these were the burial grounds of what would have been the nobles of the era. Even then, the tombs were laid out in the form of a cross. 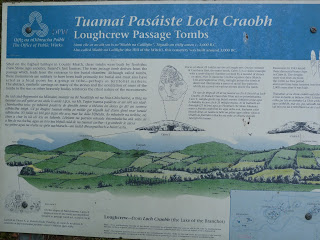 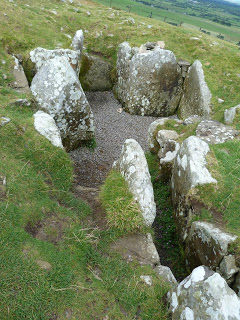 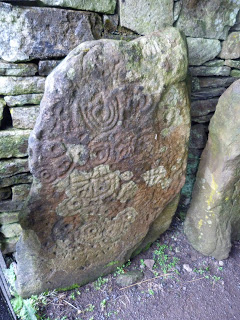 The next morning I drove from Virginia back north to Belfast to return my rental car.  Then I hopped a bus back south to Dublin Airport and my flight to the Isle of Man.  My 18 days in Ireland had come to an end – but oh, what a memorable adventure it had been!  And I met such wonderful people.  I will do a short follow-up blog post on just them!
Until next time…

One Reply to “IRELAND – PART 3 – The Wild Atlantic Way Cond.”