Early morning on the 10th I drove into the south entrance of Yosemite and made the 4-hour drive up and over Tioga Pass, which brought me out at Lee Vinning and the Whoa Nelly Deli. But let me back up a bit….

After a farewell breakfast with new best friends Joyce and Lynne, I headed into the park. Since Lake Tahoe was my destination for the evening, I needed to get over to the other side and the most scenic route is the Tioga Pass, the only road to go from East to West (or visa versa) through the Park. This drive, like all the others in the Park is ‘knock-your-socks-off beatuiful.’ 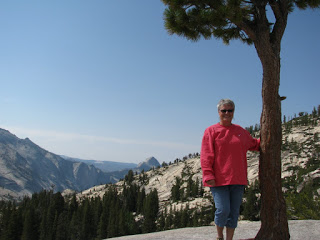 The scenery, the views, those silly rock climbers on sheer-faced granite rocks, the crystal clear lakes which reflect the surrounding mountain peaks and fluffy white clouds – it was a wonderful 3 1/2 hour drive – until the last 30 minutes.

That’s when you have to go down….and down…and down, without a single guard rail and drop-offs in the 1000’s of feet! I took one look and swallowed my tongue! I was so very thankful that school had started, the majority of travelers had gone home and left the road fairly uninhabited. Except for a stray and crazy RV driving the Pass, I managed to keep my driver-side wheels over the yellow line, as far to the left without actually driving in the opposite lane. If I could have closed my eyes the entire way down, I would have! Dear sweet Nina had seen my reaction to drop-off’s without guard rails the first day she took me in the park and had laughingly told me how much I would enjoy coming down the Tioga Pass. Witch! And no, I DID NOT stop and take any pictures. If you want to see just how far down it is, I am sure you can find lots of pictures on Google.

Almost as soon as you reach the bottom you arrive a big Mobil Gas Station and the famous Whoa Nelly Deli – the most unusual and delicious deli inside a gas station you will ever find. I timed my trip over the pass so I would arrive at lunch time. I had been told to try their fish tacos and boy, was I in for a taste treat. Fresh mango salsa and chopped cabbage salsa covered 2 huge pieces of fish in crisp taco shells, with a side a black beans. Pure Yum!

Looking out from the deli is another treat, this time for the eyes, for directly below is Mono Lake. Large, beautiful, and today hazy. 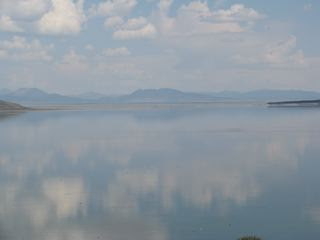 But as you see, I managed to get a picture before hopping onto Hwy 395 (which is the same road I took through the Mojave Desert – just further south) and headed north to South Tahoe, CA.

Along the way I had to stop for dozens of fire trucks and police as they were pouring into fight the Topaz Lake fire. 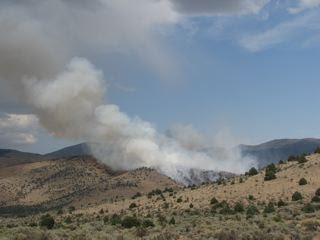 Lake Tahoe is where my friends John and Suzanne call home. We met in a grassy field someone called an RV park in central IL two years ago. I had just pulled in and gotten Winnie hooked up when they arrived in their shinny Airstream (the RV I actually lust for!). I wandered over and soon, as all RVer’s, we were swapping stories of life on the road. They were driving the entire Route 66 to celebrate Suzanne’s birthday. After being invited for dinner and getting to know each other better, we agreed to meet up a few weeks later in the Black Hills of South Dakota and ‘do’ Mt. Rushmore together. A life-long friendship was cemented with the Presidents looking down. 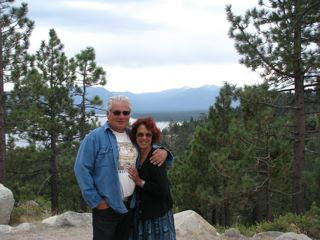 They had extended an invite to Lake Tahoe when they heard about my road trip and that I ‘could’ be in their area. I arrived mid-afternoon on Saturday and we talked and ate and talked some more, catching up after 2 years apart. On Sunday morning, after John made homemade waffles for us, we hopped in his BIG truck and drove completely around Lake Tahoe (72 miles) with them stopping wherever they knew I would love to take pictures. 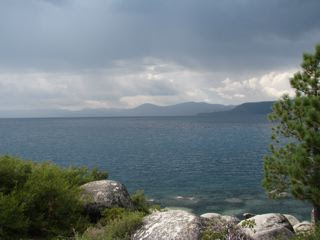 We had a wonderful day, finished with a great dinner and a really good Sunday Night Football game.

This morning, 9/12, I was up early and hit the road at 9 a.m. I headed over the pass and into Carson City, Nevada where I got on Hwy 50. Now, no one, including my friend John who knew where I was going, thought to tell me that Hwy 50, which is 2-lane, 70 mph, crosses the entire state of Nevada, west to east, is known as The Loneliest Road in America! Highway 50 roughly parallels the Pony Express Trail, which goes from Silver Springs through Fallon and along the towns across Highway 50. Remnants of the Pony Express Route are visible for much of the way. Stretching the width of Nevada, Highway 50 is a fascinating scenic and historic corridor through a land seemingly untouched by man. The road travels through snow-mantled mountains that reach summits of more than 11,000 feet.

From desert to climbs up 11,000 foot peaks, to sagebrush to rain squalls, this drive was not only barren and beautiful but exhausting. The clouds actually came out of the sky and touched the road. 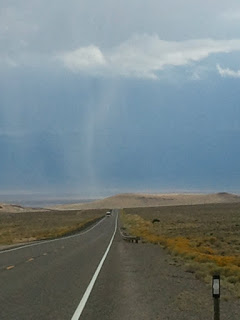 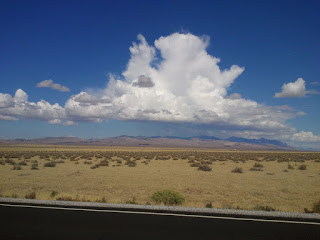 Wouldn’t have missed it for anything!

I am now settled at the Nevada Hotel & Casino in Ely, NV for the night, almost ready to go downstairs and enjoy my complimentary Margarita, see if I have any quarters in my wallet (that’s my limit for gambling money) have a quiet dinner in their cafe before collapsing.

Tomorrow, a bit more of Hwy 50 before I get into Utah and onto Interstate 70. Tomorrow night Moab – the home of Arches and Canyonlands, two of my very favorite National Parks.