I left San Diego where it was cool and raining and crossed over the mountains where the sun was shinning and it was really hot! It stayed that way, and even got hotter, as I turned north on Hwy 395 to cross the Mojave Desert. I drove past Edwards and the China Lake Air Force Bases (good place for planes to fly – a desert!) before heading a bit back West. I had chosen a spec on the map named Kernville to overnight. Didn’t know anything about it, just that it looked as far as I wanted to drive on Tuesday. Saw on the map that I had to circle Lake Isabella but was totally unprepared for the length and breath of Lake Isabella!

What I didn’t realize that I was climbing up into what is know as the ‘high desert’ This is a man-made lake, similar to Lake Powell in northern AZ just goes on and on and on with mountains bordering all sides.

Kernville is located on the north-side of the lake, with the very fast-moving Kern River running directly through the middle of town. (Lots of rafting and hiking). I stayed at the Kern River B&B which sits right on the river. 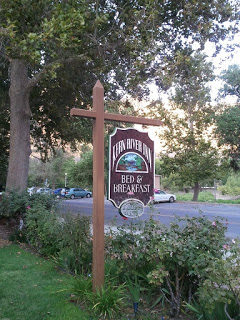 Virginia, the owner, met me at the door and I spent the night in the nicest, cleanest and most well-furnished B&B I have ever overnighted. Everything I could need was in my room or just outside my door. Her breakfast the next morning was huge and delicious. She spent time with each of her guests and made us all feel welcome. What more could you want? How about a great Italian dinner at a little bistro within walking distance, a nice glass of Chianti and then a big, comfy bed? I really hated to leave the next morning.

Once I had several maps in hand, I headed up a road with no # and deep into the Sequoia National Forest. I was told that the fire that was burning about 17 miles north of town was sorta under control and they were letting cars through. So reassuring! The drive was fantastic – up, up on a 2-lane road, with the Kern River rushing along beside me. Waterfalls just popped up out of nowhere

right in the middle of the road. As there was almost no traffic, I just stopped the car wherever I wanted and took pictures.

Helicopters buzzed overhead ferrying large bags of water scooped from Lake Isabella to douse the fire, which I never saw – just lots of fire trucks and some exhausted firefighters along the side of the road.

I kept driving with the intention of finding the right sign that would lead me to The Trail of 1000 Giants. Eventually I found the parking lot and was guided across the road, map in hand ($5 parking fee) to follow the path (cement) which winds in, around and through this grove of trees. The trail takes about 45 minutes to an hour to walk. There are self-interpretive stations along the way and benches where you can just sit and listen to the quiet.

This is the first time I have ever seen or been up close to a sequoia or as they are known in northern California, a redwood. They are so very large, majestic, soft-to-the touch, endangered and such a real, natural treasure.

After my walk in the trees, I found a secluded picnic table and just sat, listened to the forest, and had a delicious picnic lunch. To get down the mountain, I followed a road that turned out to have more corkscrews than any road I have ever been on – anywhere! It took me over 2 hours to drive about 30 miles, in 2nd gear at about 10-15 mph, on a 2-lane road with no guard rails that dropped-off thousands of feet straight down! Oh, but was it ever worth it!

Just look at the pictures I took, which doesnt begin to do the view justice. How I love this country. I love the idea that I can be driving in the flat, sandy, cactus-covered desert one day and the next be high in the Sierra Nevada mountains with the clean smell of pine filling the cool, crisp air. What a absolutely beautiful country we are privileged to call home. 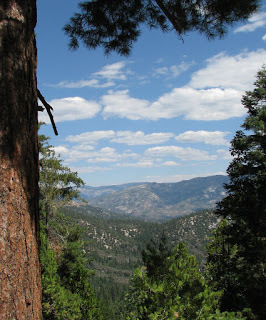 Today and tomorrow – Yosemite! I am meeting Nina, a woman I met via AARP’s online travel board, who lives near El Portal and volunteered to be my guide to the wonders of Yosemite. I’m so excited to finally get to visit one of the most spectacular of our National Parks.

One Reply to “San Diego to Sequoia National Forest”