I left Lamar, CO early morning and headed up and into the southern ranges of the Rocky Mountains known as the Sangre de Christo’s and the San Juan’s, which spill over into northern New Mexico. These peaks are consistently high – averaging 14,000 feet and locals count the number of 14’s they’ve hiked. I had 1939 miles on the odometer when I saw my first view of these breathtaking mountains. 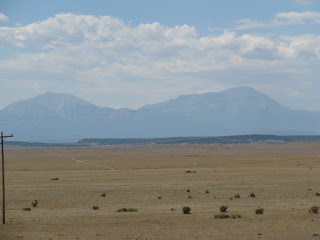 After a highway construction detour that added an hour to my trip, I arrived in Creede, CO and my jaw just dropped!

Creede was Colorado’s last silver mining boomtown. The old mine shacks can still be found perched high up the in the town’s surrounding peaks. The locals are just thrilled as the miners have returned and for the first time in many, many years, drilling for silver in the U.S. is happening here in Creede once again.

Creede is nestled in a bowl surrounded by mountains which keeps the weather temperate (that’s a CO word!) during winters compared to other places. Downtown has kept it’s quaint look, preserved it old buildings and is filled with wonderful galleries and boutiques.

The Rio Grande River literally runs through the town and sitting outside at one of the many restaurants you can actually hear it gurgling along while you dine. So very cool!

I am staying with my sister-in-law’s sister Cindy at her lovely log home for 4 whole days!

As you can see, the view from the front deck is just awe-inspiring.

I told Cindy I was considering never leaving! Though what they consider their ‘temperate winters’ might not be my cup of tea after so many cold and snow-free ones the past few years.

Cindy has been a fabulous tour guide and hostess and I have met some really wonderful and interesting people but what has really blown my mind has been attending performances at The Creede Repertory Theater. I will allow you to click on the link and read the history of this very famous performing arts group and how it came to be located in little, bitty Creede (population 600 during the winter, blossoming to over 3000 during the summer months.)

In the 3 days since I arrived, I have seen productions of The Bad Man, Boomtown (improve), and The Road to Mecca. As many of you might know, in my youth I earned my living as an singer/actor on the stages of Chicago and various other locations. I still attend performances where and whenever I can while traveling. The performance of The Road to Mecca was the first time I have ever stood and yelled Bravo!! at the curtain call!

I have never seen a more well-acted and well-directed piece in all my years of theater. This is basically a 2-woman play is by South African writer, Athol Fugard and tells the true story of Helen Martens, recognized now as an outstanding outsider artist.. It stars Christy Brandt and Kate Berry and they left me and the rest of the audience moved to tears.

With a line-up each season of outstanding plays and musicals, this gem hidden high in the mountains is something everyone who is anywhere near Creede must stop and enjoy.

Today is my last day in Creede and we are going kayaking on the Rio this afternoon. Tomorrow morning I will be up early and once again be on-the-road heading south to Taos, New Mexico I’m looking forward to once again visiting one of my favorite little towns in the entire U.S.

One Reply to “At home in the Rockies….Creede, CO”