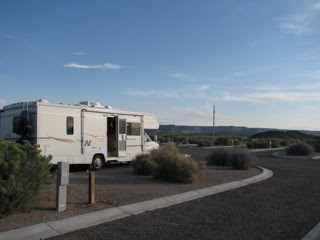 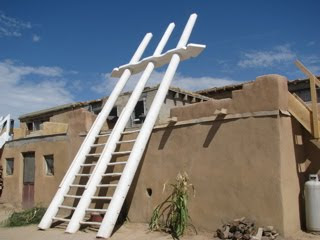 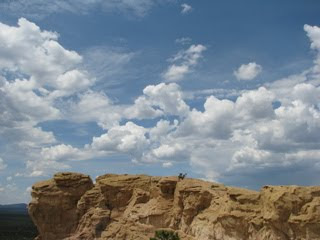 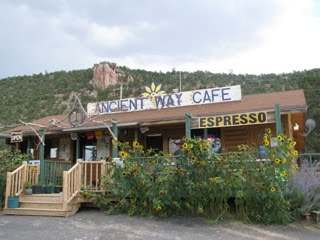 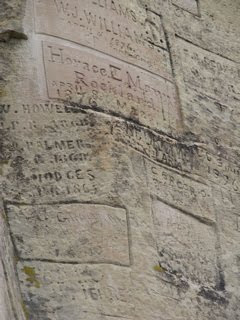 ReAnn is on vacation this week, so I volunteered to be her guest blogger. My name is Ellen, and my qualifications for this honor are that am her good friend and am sitting in Winnie…having spent the last six days with ReAnn exploring central and northeast New Mexico. It’s called the “Land of Enchantment” and for good reason. But get ahead of myself…

Our adventure began last Saturday when ReAnn picked me up at the Albuquerque airport in her Jeep, and we immediately drove to Old Town for some exploring and lunch. Great introduction to the area…restored adobe buildings…beautiful jewelry in every Southwest style imaginable…and a tantalizing introduction to the fine art the for which the area is so famous. Then, off we went on the west-bound interstate (where old Route 66 used to be) — to where ReAnn had parked Winnie the evening before — for my very first night in an RV. While Re and I have travelled together many times, I wondered if Winnie’s close quarters would test our proximity tolerance. But so far, so good. We seem to have learned the dance-of-close quarters.

As you can see in the picture, the RV park was rather barren. No picnic tables…no landscaping…no personality at all, in fact. The place was tucked behind the semi lot behind a small casino just off the busy interstate. Must confess, a tad disappointing after ReAnn’s tales of luxury parks with lakes and golf courses. But the view certainly was beautiful. To give you an idea of how generous ReAnn is, I’ll share that she gave me her own queen-sized bed for sleeping and moved herself to the pull-out bed in the front. But neither of us slept particularly well that first night. Many late arrivals to the park. Too much ambient light from the truck stop and casino. And, I’m sure, a bit of anticipation of the week’s adventures ahead.

But we agreed the park was good for location, at least, since early the next morning we ventured out to visit the ancient Acoma pueblo just to the south. The drive took us through the modern pueblo where most in the Acoma tribe live today. A rather typical rural community with homes of many styles, a modern school, community center, etc. Then, we crossed open desert and headed into some winding mountain roads. I cannot adequately describe the vista that unfolded as we came around the highest curve. Stretching out before us was a deep desert valley tucked between two mountain ranges. All oranges, golds and reds emitting almost an incandescent glow. And there, across the valley, was a high plateau with the pueblo buildings only slightly discernible from the mesa’s natural stone. We crossed the valley past other-worldly rock formations jutting from the flat valley floor, and as we approached, the pueblo took more certain form. Amazing. The questions began… How did they build up there? Why did they build up there? And on and on.

From the visitor’s center, a mini-coach took us up the mesa’s side. Our walking tour of the site was led by a member of the tribe. A gentle man whose love of his ancestral home, his family, his Tewa-speaking neighbors, his religion and the history of his people he wore as a spiritual cloak that virtually glowed like an aura around him. He shared much about the pueblo, including showing us the many sacred kivas — or places of ceremonies, learning and worship — throughout the site. This picture shows just one of the kivas with a spectacular ladder providing access to the ceiling entrance. We were told that the ladder’s vertical poles symbolically point toward the heavens and the arrow at the top provides protection. To this day, only men of the tribe are allowed in kivas. And while our guide also shared that only men serve on the governing council, he also said that they live in a matriarchal culture where women own all the land and possessions and control much else of the tribe including lineage. Very interesting balance that has served the culture beautifully for hundreds and hundreds of years. In fact, the pueblo has been continually inhabited for at least a thousand years. Those who live there today do so without running water, electricity or indoor plumbing. Their motivations are different. Some elders, because it’s the only life they know. Some male tribe members because it is their responsibility to serve a period taking care of the ancient city. As our tour wound down, the guide showed us his family’s ceremonial home and invited us back to join them for a huge festival to be held the following Wednesday. Music. Dancing. And tons of food. Very sorry we couldn’t make it. I’m quite certain his invitation was genuine.

Sorry, no pictures to share of the valley. On our way down, we were not allowed to take any as you must have a permit to capture images within the pueblo environs, and upon our return — with permit tag hanging on ReAnn’s camera — its batteries died. I have pictures emblazoned in my head…but none committed digitally to share. You’ll just have to visit this spectacular and wondrous place yourself.

As it was our first day together, we had ambitious plans for more adventure so then, headed further afield and west to an area called The Badlands (but, generally, referred to by its Spanish name which escapes me at this late hour). From atop sandstone bluffs — as far as the eye can see — simply miles and miles of craggy, volcanic rock. This sea of intimidation lies along the major trade route between the Acoma and Zuni people, so they certainly blazed a trail through the rocky blackness to ensure they could exchange valuables and wares. A rugged land of stunning contrasts. And the light…again, the amazing impact of the sun of this spectacular landscape is not to be believed. Everything stands out in brilliant contrast.

After that, we headed out to one last sight even further west. We had begun to rely on our trusty Frommer’s guide on New Mexico and called to see if there were any chance that the specially noted roadside restaurant was — contrary to published details — open on Sunday. Yeah! It was. Happily, when we were only a mile from our last site of the day, we stopped for a very late lunch at The Ancient Way Cafe. What fun. Sat on the porch and enjoyed freshly made Chicken Pesto. Chatted with the Native American waitress…and then, the chef. A most interesting fellow. Former potter. But someone who definitely never wanted to work for “the man”. At dessert time, we wanted to try their famous Berry Cobbler with Green Chili…but, alas, it was sold out for the day. Just HAD to suffer through the blackberry cobbler with ice cream. Sugar is a great re-energizer. So, off we went with only an hour before the gates closed on our next and final stop for the day.

And what a site it was. The huge, almost white mesa face soaring over 200 feet above the high valley floor has captured the history of dozens of people who passed by…from the ancients who left hieroglyphics to the early Spanish who tried to conquer the native inhabitants…from professional soldiers testing the use of camels to cross to California to simple pioneers making their way west to start new lives. Historic graffiti carved in stone with antler and chisel alike.

While we didn’t have time before park closure to take the trail to the mesa top, we certainly enjoyed picturing the ancestors who spent a night or two resting at “Inscription Rock’s” base, quenching their thirst at the mesa’s cool-water pool and preparing to move on bravely — though not always with a cause as righteous as they thought. This site is also called El Moro, if you’re looking for it on a New Mexico map.

After that, it was a rather long drive home to Winnie (thank you, ReAnn…because I never learned to drive a stick) and preparation to hook up the Jeep, unplug Winnie and head east and north toward the mountain and Santa Fe.