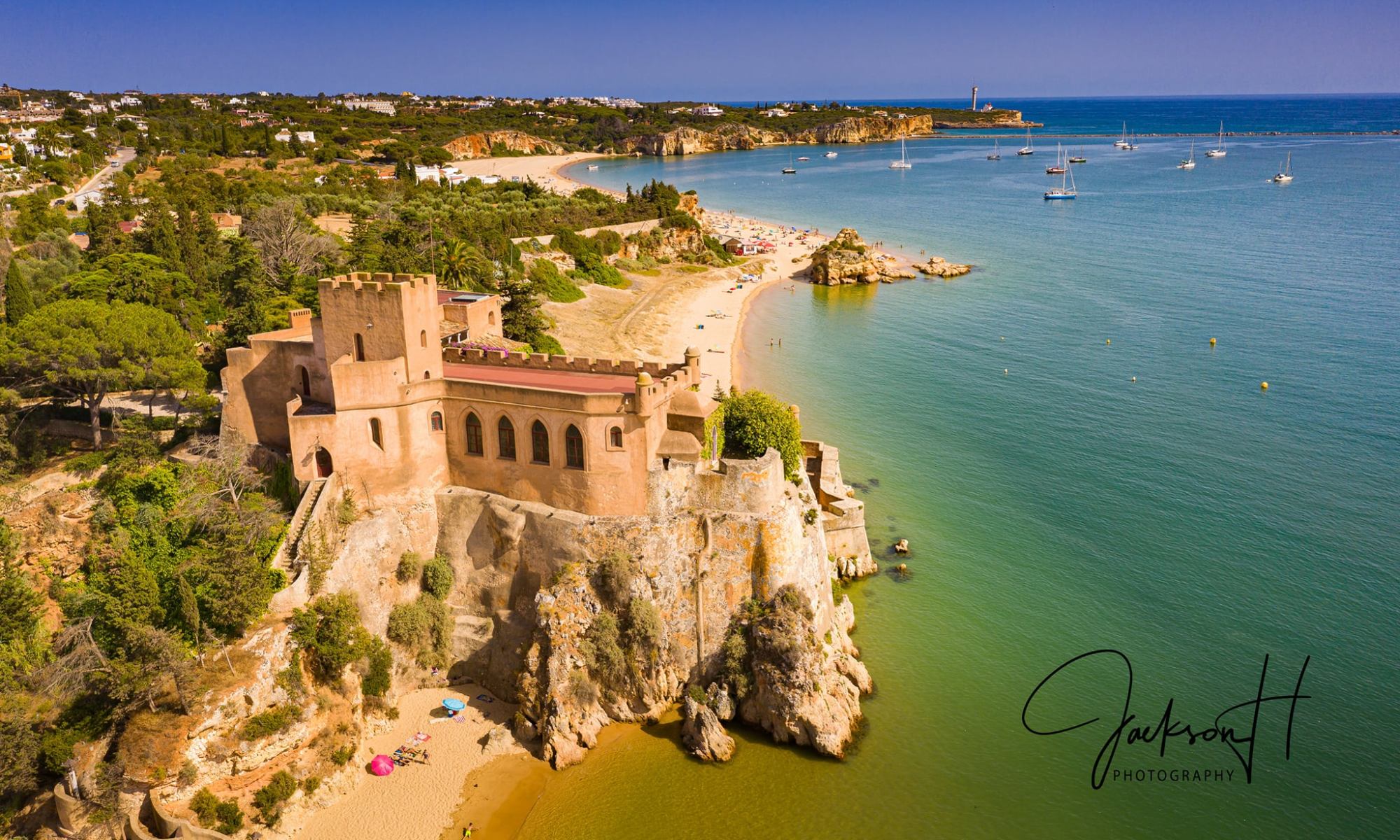 It finally became time for us to leave our quiet, safe little fishing village by the sea. It was time to leave our home with it’s very own castle and return home to our ‘real worlds.’ But before we said goodbye to Ferragudo (adeus in Portuguese) we enjoyed several truly special farewell events.

Our most wonderful, gracious and hospitable landlords, Jorge and Maria Jóao had us for one last dinner at their lovely home. Maria said it was to be a ‘typical Portuguese dinner – fish pasta’ and Joyce and I were to bring the hor d’oeuvres. We decided these should be typically American. I made deviled eggs and Joyce wrapped bite-size melon pieces in prosciutto. They must have liked them because both were gone within minutes!

Joyce tried so very hard to sneak Suri, Maria’s Scottish Fold kitten she fell in love with into her bag but got caught at the last minute!

We thoroughly enjoyed our ‘going away lunch’ with the ladies we worked with at the local thrift shop. These women can certainly party! Lunch began at 2 o’clock. We left after 2 hours and learned later that they continued on until 8:00 PM!

We enjoyed our last meal with our friend Joyce #2 at the amazing Vietnamese restaurant, Sen Tonkin, in the village. We both wished we had known how wonderful their food was earlier!

The next morning Raquel picked us up and took us to the train station in Portimao for our 3 1/2 hour trip (with just one change of trains) to Lisbon. The train was very nice, social distancing was practiced and masks were required. Being seniors, we got a reduced fare of €13 one way!

We had originally booked a lovely apartment in Lisbon for the last week in March before we were scheduled to fly home on March 31st. As you know, that didn’t work out as planned. The company we had booked with, Feeling Lisbon Apartments, refused to refund our deposit of $400 USD. Instead they gave us a voucher that was good for a year which we could use upon our return. Seriously? That voucher was worth a 4-night stay and we decided to use it before we left Portugal, as who knew when and if we would be returning.

The location was really great – the apartment not so much! Pictures can be so deceiving and though we knew it was on the 2nd floor (which in Europe means the 3rd) we weren’t prepared for the extremely steep and narrow flights of stairs. Joyce came up with the brilliant idea of giving our taxi driver a huge tip if he would carry our bags up those stairs. It worked and Paul was our friend for life – or a least for the next 4 days. He drove us into and around town and to the airport on our last day, when he once again carried our bags down those stairs!

We threw our stuff in the apartment and took off walking toward Centro, hoping to find a place to lunch, do some sightseeing and maybe shopping. We had a lovely day, a great lunch and though some of the sites we wanted to visit were still closed, we thoroughly enjoyed the afternoon.

But when we returned to the apartment Joyce took a tumble and really hurt her already bad arm. By nightfall she was the most amazing shades of purple and blue I have ever seen. The lovely scarf she had just purchased that afternoon became her sling. The pain was terrible and thoughts of even going up and down those stairs was not even thinkable. Thank goodness for Uber Eats!

She did recover enough that on our last night we met up with fellow Senior Nomads, Phil and Jan Taylor, for much wine, a yummy Middle Eastern dinner and great conversation.

The next morning Paul took us to the Lisbon airport for our flight to Amsterdam. Why Amsterdam you might ask? Well, here is where trying to fly anywhere during a pandemic is problematic.

You don’t want to know how much all of these changes and additional flights cost! Some airlines said they would refund our money – in a month or two. Others just offered vouchers. Since the airlines really aren’t legally supposed to do that, we both filed claims with the DOT. I’ll keep you posted if and when we ever hear from them.

Our KLM flight departed on time with all safety protocols being followed to the ‘t’. We arrived on time and I had booked us a room at the Hilton at the airport so we just walked through the skyway (I walked, Joyce was pushed in a wheelchair by a very nice young man) 15-minutes to the hotel. We were maybe one of 10 guests in the entire, archeticually-unusual place.

But the bar was open – whoopie – so we enjoyed a cold drink and snack before my friends Lisa and Frits picked us up and took us to this amazing restaurant that was originally an old power plant on one of Amsterdam’s numerous canals for our last delicious dinner in Europe.

I was the first to depart the next morning. My AA flight departed at 10:09 a.m. and 9 1/2 hours later I landed in Dallas. How was the flight, you ask? Amazing – as there were 12 crew members and 28 passengers on the entire plane! I had all of the Premium Economy section to myself!! I just loved the shades that turned colors as we flew through the day and into the day.

I shared ‘my bathroom’ with just one other person. I had the entire row to lay down in – which really isn’t comfortable with the seatbelt buckle poking you in the back. I watched 3 really good movies – Bombshell, A Wonder Day in the Neighborhood and Ford vs. Ferrari. I had a decent hot dinner/lunch and skipped the snack.

Customs in Dallas was a breeze. I was in and out in less and 15 minutes and that included picking up my bag. What I did notice immediately at DFW and the next day in Houston was that masks were not required and social distancing was up to you to practice. I was amazed when the United Airlines gate personnel didn’t have on masks even though they made the announcement that everyone was required to wear them during the flights – thank goodness.

The flight from Dallas to Houston left at 7:00 a.m. After a very short and almost sleepless night (my body had no idea what time it was or even what country I was in!) at the Hyatt Regency at the airport, the 42-minute flight was quick and about 1/3 filled. I had a 2-hour layover in Houston where masks were more prevalent but again, not required and no social distancing practiced. (Have you see the latest virus stats for Texas? And they wonder why!)

The flight from Houston to Leon, MX was almost sold out. United had been texting me for two days asking me to change my flight – for free – but I declined. I wanted to get home. I had upgraded my seat so I lucked-out and in a 3-across row, the middle seat was vacant. (And yes, on every flight I used my own disinfectant wipes to clean the seat, buckles, tv screen, and armrests.)

I was totally impressed with customs in Leon. They followed all health precautions from temperature taking to hand-sanitizing plus several forms to fill out about my personal health. Again, it was fast and I was through customs (I think they are still only allowing people with Mexican citizenship or Residente Permanente Visas into the country) in minutes. My shuttle driver was waiting and an hour and a half later I was walking in the door of my good friend’s Ira and Diane’s lovely home in San Miguel de Allende. (Joyce made it in just one flight, safely home to Atlanta.)

San Miguel is quite. The gringos are all wearing masks and most are still self-isolating, me included for the next 14-days. I’ve managed to find an adorable apartment for rent and look forward to settling in and ‘nesting’ while the world finds it’s ‘new normal.’ I traded a village with a castle for a town with a beautiful Parroquia and here I will stay…at least for awhile.

Thank you to everyone who have read and said you enjoyed following my and Joyce’s amazing lockdown adventure. I’m going to take a break from blogging for awhile but please don’t hesitate to ask if you have questions about our trip, I’ll be more than happy to answer each one.

8 Replies to “Farewell to Portugal…Hola Mexico!”