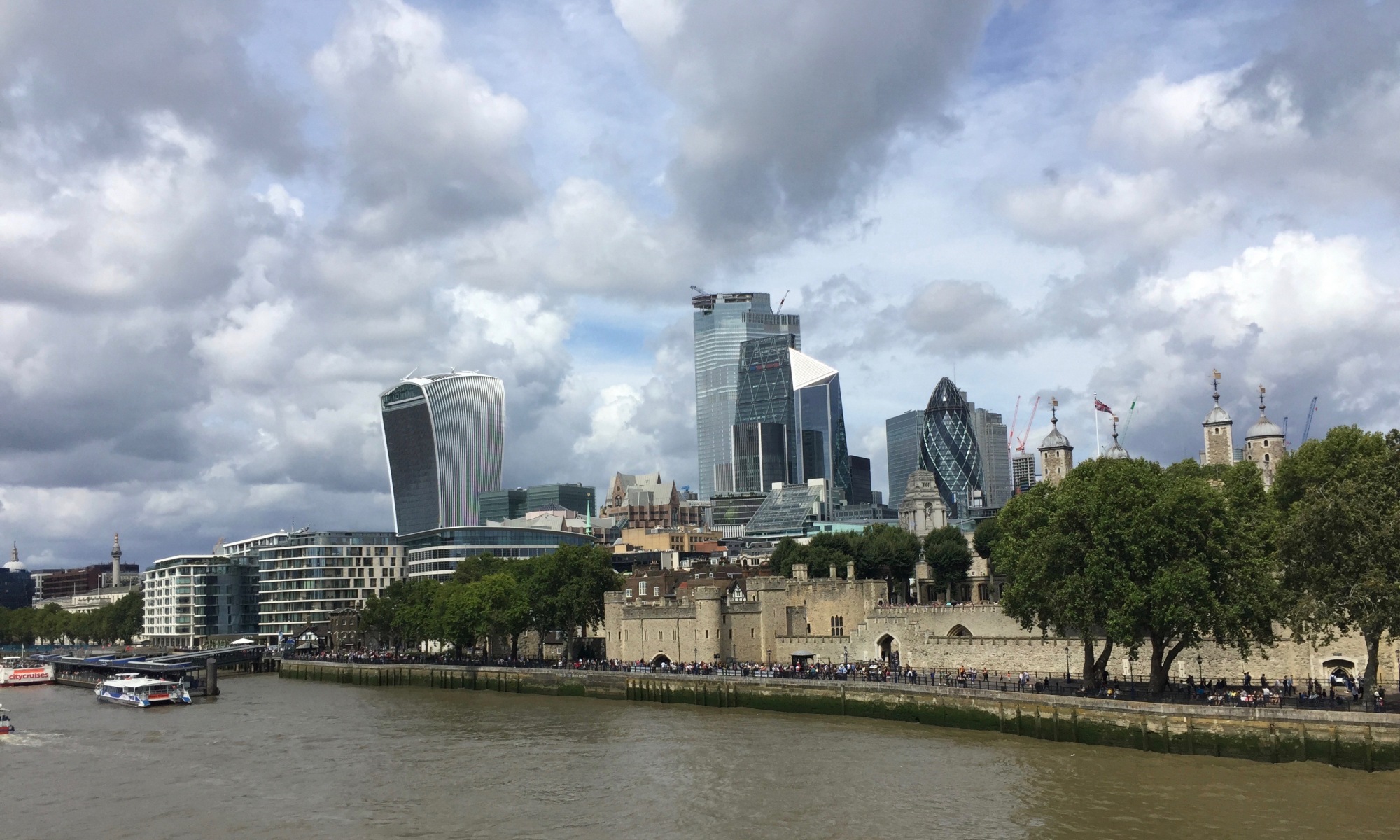 I love London! I have visited this great city many, many times and I always find something new and something old that make me want to return again and and again.

We flew the amazing Ryanair (which many hate but I actually really like) from Madrid to Stansted Airport north of London for the whopping £39!

We had pre-purchased our shuttle bus ticket from the airport to central London so we just grabbed our luggage, hopped on the bus and were in front to Dirty Dick’s Pub in Bishopsgate in time to enjoy the perfect British lunch of the very best fish & chips lunch I had ever eaten! And yes, it was served with mushy peas and cold beer. Nothing better.

From Dick’s we hailed Uber for a ride to our Airbnb on the Isle of Dogs. This area north of London central has an extremely rich and literally reclaimed past. Though near Canary Wharf, this was is the most confusing area I have tried to manoeuvre around in our short 4-day stay. Even Google Maps got lost!

It’s filled brand new, big, tall, wonderfully-weirdly designed apartment buildings and offices that are all surrounded and intersected by canals and bridges. It was difficult for our Uber driver to find the location of our Airbnb, even with his GPS, and in the end, he still couldn’t get us to the front door! But the view, if you love architecture, was amazing!

We had purchased our Oyster cards, which is London’s amazing public transportation card, after our lunch at Dick’s. With this one little card you can ride on the double-deckers buses, the Tube, the train to Heathrow an even the Thames Clipper – my absolute, hands-on favorite way to travel in London!

These wonderful, big catamrans run a regular schedule up and down the Thames and for the cost of a fare, you get an amazing tour of central London from the water. They stop at all the main areas so in lieu of the tube or bus, especially on a sunny day, grab the Clipper!

This is what we did our first full day in London and it dropped us at our first destination – The Tower of London!

I hadn’t toured the Tower since the early 80’s and Joyce had never been inside, so on a beautiful day we joined a long line to those waiting for the gates to open.

We tried to take a free ‘walking tour’ lead by one of the Beefeaters, but it was so crowded that after the 2nd stop where we were so far back in the pack and couldn’t hear what was being said, we gave up and did our own tour.

I especially love the way The Tower, which was built in 1078 by William the Conqueror, sits proudly surrounded by some of new London’s most well-known buildings – like the Gherkin and the Walkie-Talkie!

We saw the Crown Jewels, or I should say we moved past the Crown jewels on the moving walkway (no photos allowed). The photo of the modern blue/green glass sculpture is where famous folk, like Anne Boleyn and others lost their heads!

Next we headed to nearby Tower Bridge and took a leisurely stroll (with hundreds of others) across the bridge with stops for some great photos of the surrounding area!

Then it was late lunchtime. Time to find a great pub and more fish n’ chips!

The next day we had signed-up through Airbnb Experiences for a walking tour of three of London’s largest markets. We ate our way through each, starting with my favorite, the Borough Market. The 2nd photo on the top row of the brownstone building is in the Borough and was the ‘home’ of Bridget Jones from all her movies. We finished this very long tour (we walked from one side of town to the other!) with a very late but delicious Indian lunch. It was time to return to our cozy Airbnb and put our tired feet up for the evening and call Uber Eats for dinner!

Our last full day we crammed in lots of really fun things! We started the morning with an early visit to Buckingham Palace. Her Majesty wasn’t in residence, so many of her public rooms were open for viewing. They were celebrating the 100th year of Queen Victoria’s birth, so photos and special items of this tiny and long-reigning Queen were on display. She really was short! Again, no photos were allow inside the palace, but I got some nice shots of the outside and surrounding grounds.

Once again, lunchtime. We hopped the tube and headed to Covent Gardens for a delicious lunch of mussels, wine and people-watching at Buns & Buns.

To finish the day, we took the Picadilly Line back to South Kensington and the famous Harrods Department Store. One my greatest possessions while I was living in Brussels in the 70’s was my very own dark green Harrods credit card in my name

The store is still amazing and still so expensive that even if I still had that card today, I couldn’t afford much of what the there is for sale!

But Harrods is still so much fun to wander around and get lost in. From the delicacy-packed flower and food courts to the Egyptian stairwell, it is one of the most beautiful department stores in the world. We spent a lot of time in the high-end couture handbag and accessories area just watching hundreds of middle-eastern women and men buying everything in sight!

Early the next morning we called Uber for a ride to Paddington Station (yes, they do have several of those famous bears on display) where we caught the fast train to Heathrow and our flight to our next destination, the Isle of Man.