More than half the fun of this trip has been stopping to visit with family and friends. Once I tore myself away from the yarn co-op, it was just a short drive to Mile Marker 19 on Hwy 515. From there I turned right down a very dusty dirt road to the pasture with cows (and a mailbox) where I once again turned right and drove past those cows until I came upon friends Gerry & Johnny’s lovely 1 bedroom cabin perched high on the hill.

Gerry & Johnny are my neighbors on the beach each Spring and Fall, but return to New Mexico to ski in the winter and enjoy the much cooler summers (normally), thus missing all our wonderful tourists.

When invited to stop by on my trip, they also asked if I wouldn’t mind sleeping in their guest house…a brand new 27′ camper! I said I would love it, it would almost be like I was once again RVing! I was so tempted to just hook it up to the back of the Jeep and sneak away in the middle of the night! (I’m bad!)

We had a wonderful dinner on their deck and watched the sun set win a blaze of color. I turned in and was all comfy in my big bed in the camper when my nose started to run and my eyes to water and a fit of sneezing occurred. (Reason to follow in later blog.) 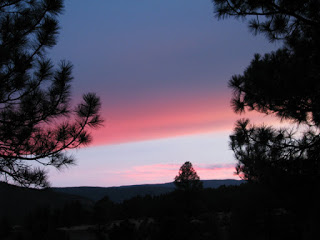 Sapello, the very small town where their cabin is located, is literally a ‘blink and you’ll miss it’ type town. A gas station with a small store and a post office – that’s it. It also is where Patrick Swayze lived and had his ranch.

The next morning we headed south to Las Vegas (the first one – not to be confused with the 2nd one located in the desert with all the neon lights and money-taking machines) This one is the biggest town in this part of New Mexico. With it’s doctors, Wal-Mart and many tack and feed stores, it supplies all the huge ranches that surround it, all the way East to the Texas border and north to Colorado. This old Spanish-settled town was a big stop on the west-bound Santa Fe railway and boasted a Carnegie Library, a wonderful old Plaza Hotel set in the town square and a Harvey Hotel for visitors coming off the train. (Remember the Judy Garland movie when she played a Harvey Girl?)

The picture above was The Harvey Hotel and is now The World College. I had never heard of the World Colleges before, so immediately I googled for information and want to share with you what I learned. The concept is brilliant and we certainly could use many more such colleges…a place where young people from all over the world come together and learn that their differences aren’t so different, and that we can all live together peacefully.

German educator Kurt Hahn, founder of Outward Bound, conceived this bold concept of UWC in the 1950s at the height of the Cold War. Hahn believed that much could be done to overcome religious, cultural, and racial misunderstanding if young people from all over the world could be brought together.

Today, thirteen UWCs span five continents. UWCs share a common philosophy and mission, but geography and other individual characteristics shape each campus. Students are drawn from an extensive range of nationalities, ethnicities, religions, and political persuasions and are selected from within their own cultures by volunteer UWC national committees.

At the urging of HRH Prince Charles, the first President of UWC/UWC-USA was founded in 1982 by the late Dr. Armand Hammer, who originally bought and restored the old Harvey Hotel as a private estate. Since its founding, UWC-USA has extended its transformational experience to over 2,500 students from over 100 countries and all walks of life.

The Armand Hammer United World College of the American West (UWC-USA) is a two-year residential school that marks the beginning of an experience that is life-defining.

Located in Montezuma, New Mexico, UWC-USA makes its home at the edge of the Pecos Wilderness in the foothills of the Sangre de Cristo mountain range, the southernmost point of the Rockies.

Arriving from over 80 different countries and representing a myriad of cultures, traditions, languages, and ethnicities, 200 accomplished student ambassadors, aged 16-19, begin their education as strangers and together confront a multitude of new ideas and opportunities. They develop an ethos of critical thinking, discovery, and cross-cultural understanding that will frame the lives they lead and touch the people, institutions, and societies that they serve. 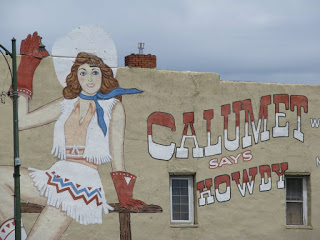 The Spanish and Mexican influence brought lots of color (and hot and spicy foods) to the American West, as this brightly painted small church with it’s cemetery filled with colorful plastic flowers clearly attests.

After another delicious dinner on the deck, another beautiful sunset and another night of sneezing and running nose and eyes (cause still under investigation) I waved goodbye to Gerry and Johnny and headed toward Santa Fe and the arrival of my good friend Ellen from St. Louis. I would be seeing Gerry much sooner than Johnny, as she was driving into town later today to spend the night and all the next day at Indian Market with Ellen and I. Why is it shopping with ‘the girls’ is so much more fun that with your husband?