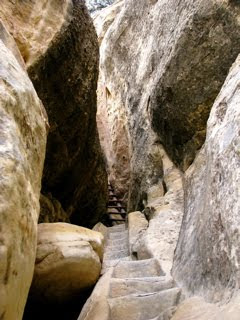 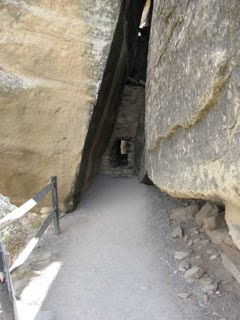 On Sunday I drove to Cortez, CO, a 2-hour trip, to explore Mesa Verde National Park. First, I love my Park Pass! Once you are 62, for only $10, you can purchase a lifetime pass to all our national parks! What a great thing and I have used my extensively since arriving out West.

Mesa Verde is not only a national park, but a designated World Heritage site. The pueblos were built and lived in by the’ ancient ones during 1200 a.d. These peoples occupied these cities built of sandstone and into the overhangs of high cliffs for approximately 200 years before moving on top of the mesas. They built these cities with only the rudest of tools. As you can see from the pictures, their houses and storage builders were several stories high. They are expertly chinked with wattle, bits of rock and the hard woods of the trees that still grow on these high desert plains, and are still strong and sturdy today. Deep kivas (fire pits) were dug deep into the rock, vented and had curved ceilings which protected the occupants when the rains and snows came.

Getting in and out of the pueblos was, and still is, extremely strenuous. Hand and toe holds were carved out of the rock and ladders were built to access the different levels in the pueblos. It is amazing what these ancient ones could accomplish and do. I signed up to take 2 tours, each guided by a park ranger, down into Cliff Palace and Balcony House. These are just 2 of the dozens of pueblos you see tucked into the overhangs ringing the canyon walls. When they described the 30′ ladders (bolted to the rocks but offering no ‘catch if you fall off’ system and the tiny 12′ rock tunnels you must scurry through, feet first, I wondered if I could face my fears of heights and closed-in places and actually do it. But how can you not when offered the opportunity to see up close how these people lived?

I was so happy that it was much cooler in Colorado that day. Large clouds kept the sun from beating down and temperatures rising into the 90’s, as they do daily in Moab. A nice breeze was blowing and the sun peaked out enough to make it a perfect day to be scampering over rocks and cliffs. So I locked everything in the Jeep, slung my camera over my neck, took a deep breath and said ‘I CAN do this’ – and did. And I had a blast! I ended up spending 7 hours touring the park, it’s museum, enjoying a picnic lunch and finally heading back to Moab as the sun was setting.

The route to Cortez is the same I will take this Friday when I wheels-up and head to Albuquerque to pick up my friend, Ellen at the airport. I got to drive over the rather steep grades that take you out of Moab; through Monticello where they have literally torn up the entire highway all the way through town; see where I will turn south on the infamous Hwy. 666 out of Cortez that will take me through the Navajo nation reservation and drop me onto I-40 in Gallup, NM. It will be an interesting drive in Winnie, towing the Jeep, and in some places very slow-going. This highway is the main trucker route from Phoenix up to I-70 and Salt Lake City, so there are lots of ‘passing lanes’ for trucks and RV’s to move into while climbing, allowing those who drive ‘normal vehicles’ to get around us.

Sue, the wonderful owner of Moab Rim Campark, asked me again this morning when I was returning next year. It’s so nice to be wanted:) I can’t promise her anything, as who knows where or what I will be doing next summer? But if you are ever in this part of the country, and even if you don’t own an RV, their little cabins and cottages are the perfect place to stay for a night or more while you explore all the fabulous sites in and around this area. And their gracious hospitality cannot be beat! I will miss them.

Now don’t get upset and send emails about me not posting as once I get to Albuquerque, I’m ‘on vacation’ for a week. Promise to take lots of pictures of Santa Fe and Taos but won’t have the time or want to upload them while spending time with Ellen exploring! Once I’m back on the road, I’ll share all we have seen and what we have done during the next 10 days.

Until then……take care of each other.